Goatsnake share a new jam, Grandpa Jones from their upcoming album, Black Age Blues, due for release on June 1st‏ 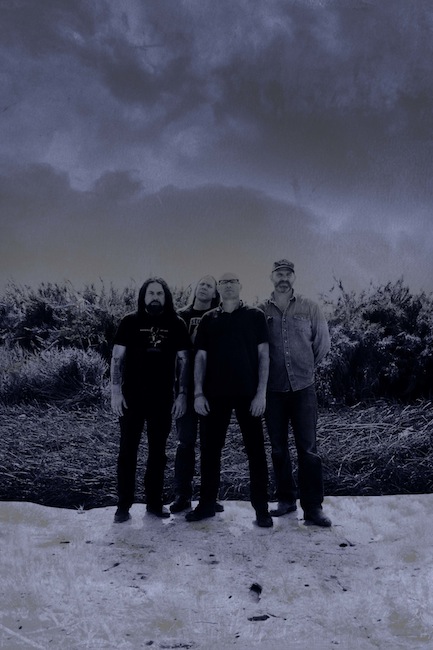 GOATSNAKE SHARE NEW JAM, “GRANDPA JONES” FROM THEIR UPCOMING ALBUM, BLACK AGE BLUES, DUE FOR RELEASE ON SOUTHERN LORD JUNE 1ST
Goatsnake are sure to get your motor running with their latest jam “Grandpa Jones”, a celebratory rock ‘n’ roll affair all about the life and times of a standout elder gentleman that Team Rock are premiering today. Pete Stahl’s vocals cruise with ease alongside those of backing singers, Dem Preachers Daughters, while almighty riffs lurch forward with the rumbling horsepower singularly linked to Greg Anderson’s guitar work. Says Anderson of the track; “Grandpa Jones: One of the first of the new songs we wrote.  Channeling Flag and Sabbath (that ole’ moldy chestnut!).  Lyrics about keeping the yout juice flowin’!”
“GRANDPA JONES” – BREAK IT DOWN
You can also listen to “Black Age Blues” and “Elevated Man” ahead of Black Age Blues’ release date in just over a week and a half. The inner layout of the artwork can be viewed on the band’s webpage.
Black Age Blues will be released through Southern Lord Recordings June 1st, and preorders for the album are now live. In addition to physical preorders, the record is also available via iTunes, offering the tracks “Black Age Blues”, “Elevated Man” and “Grandpa Jones” for instant download, which are now available to purchase individually. Check out the preorder options at the new Goatsnake store, via BandCamp and iTunes.
Following a sold-out performance in secluded Pioneertown, California and a record listening party in Los Angeles this past weekend, Goatsnake now prepares for their hometown record release show for Black Age Blues with Southern Lord brethren Bl’ast and Eagle Twin on the 20th. Just days later, the band makes its cross-country voyage to Maryland Deathfest in Baltimore, marking the band’s first East Coast performance ever. Less than a week later, Goatsnake will hit Europe for a week-long tour which kicks off at Temples Festival in Bristol, and includes a headlining set at Siegen, Germany’s Freakvalley Festival. Upon their stateside return, they’ll headline Crucialfest in Salt Lake City, Utah, with additional tour dates being scheduled.
With nearly fifty minutes of Goatsnake’s most soulful and boisterous material to date, the quartet expands their already mammoth tones and pummeling rock riffs with a variety of additional influences and elements on Black Age Blues, an instant classic, with each one of the nine songs an anthem, and each of its members — vocalist Pete Stahl (Scream), drummer  Greg Rogers (The Obsessed), bassist Scott Renner and guitarist Greg Anderson (Sunn O))), Southern Lord Recordings) — all in top form. With guest contributions from David Pajo (Slint, Aerial M, Papa M) and soul vocal trio Dem Preacher’s Daughters, comprised of Wendy Moten, Gale Mayes and Andrea Merrit, the album was recorded and mixed at Rock Falcon Franklin, Tennessee by Nick Raskulinecz (Queens Of The Stone Age, Foo Fighters, Alice In Chains, Mastodon, Rush) and mastered by Brian Big Bass Gardner (N.W.A., Stevie Wonder, Parliament).
Goatsnake live shows: