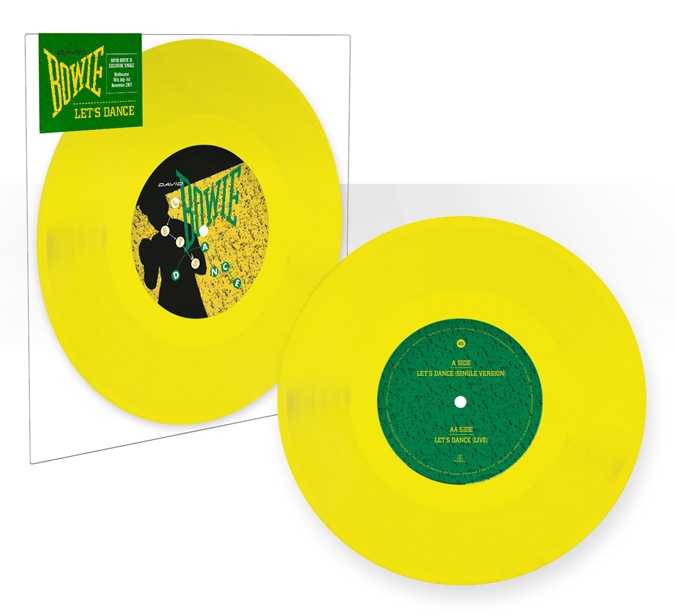 DAVID BOWIE ‘LET’S DANCE’ LIMITED EDITION ‘DAVID BOWIE IS’ YELLOW VINYL 7″
July 16th 2015 sees the release of a special limited DAVID BOWIE 7″ single, a yellow vinyl edition of LET’S DANCE to celebrate the opening of ‘David Bowie is’ at the Australian Centre For The Moving Image (ACMI) in Melbourne.
Originally released in March 1983 LET’S DANCE, the video of which was famously shot in Australia, is taken from the album of the same name and the AA side is a previously unavailable on vinyl live version of the track recorded in Vancouver during the Serious Moonlight tour. Both have been remastered specifically for this release.
David Bowie is was created by the prestigious Victoria and Albert Museum (V&A) in London, where it premiered in March 2013. It quickly became the V&A’s fastest selling exhibition and is on record as one of its most popular shows, since drawing over 1 million visitors to date on an international tour and widespread critical acclaim.
Now, in its only Australasian season, David Bowie is will take Melbourne by storm with its premiere at the Australian Centre for the Moving Image (ACMI) on July 16, 2015 as part of the prestigious Melbourne Winter Masterpieces series. With sell out seasons around the world, advance bookings for Melbourne are highly recommended. For tickets and information visit acmi.net.au/bowie
Available exclusively to the exhibition in Melbourne will be two very special vinyl releases, the first is is the LET’S DANCE 7″ limited to just 550 copies and the second is 500 copies of the 2008 album iSelect on Limited Edition Red Vinyl for the exhibition, which instantly sold out when it was made available in limited quantities at the Paris showing of ‘David Bowie is’.
To win copies of this very rare collector’s item stay tuned to www.facebook.com/davidbowieofficial
DAVID BOWIE
DAVID BOWIE ‘LET’S DANCE’ LIMITED EDITION ‘DAVID BOWIE IS’ YELLOW VINYL 7″
A-Side Let’s Dance (Single Version)
(David Bowie)
Produced David Bowie & Nile Rodgers
AA-Side Let’s Dance (Live)
(David Bowie)
Mixed by Bob Clearmountain
Recorded live at Pacific National Exhibition Centre, Vancouver, British Columbia, Canada 12/09/83
LET’S DANCE is released on Parlophone July 16th 2015.
http://www.davidbowie.com