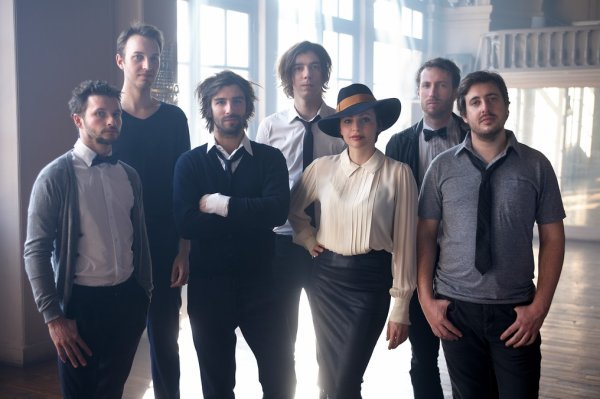 Parisian electro-swing pioneers Caravan Palace are revved up and ready to hit the road announcing their biggest UK tour to date. This is long-awaited news for the thousands of fans who sell out their every gig, from the Shepherds Bush Empire in London to the Fonda Theatre in Los Angeles, and all posts in between. Here is a band whose appeal has grown off-radar, appreciated for both their musical virtuosity and their sheer ability to deliver a ballistic good time.

Tickets go on sale to the general public on Friday 23 May at 9:00AM.

Advanced o2 Priority presale from Wednesday 20 May 9:00AM for 48 hours o2priority.co.uk/CaravanPalace

Since the release of their 2012 album ‘Panic’, the band’s live profile has risen unrelentingly, their concert tickets flying out with minimum promotion and zero-hype. A true word-of-mouth sensation, they’re capable of tearing the roof off any festival tent from the boutique shenanigans of the Secret Garden Party to the gigantism of Coachella.

Let’s wind the clock back to 2005 when the core members originally gelled – bassist Charles Delaport, violinist Hughes Payen, trombonist Antoine Toustou and guitarist Arnaud Vial. Studio wizards to a man, these days their easy instrument-swapping is also part of the Caravan Palace experience but back then they were simply old school-friends trying to recreate the vibe of Django Reinhardt and violinist Stéphane Grappelli’s legendary Quintette du Hot Club du France.

Of course a vital part of the Caravan Palace formula is their front-woman, the irrepressible bob-haired flapper Zoé Colotis, as well as sidesmen Camille Chapelière (clarinet/saxophone) and Paul-Marie Barbier (vibraphone/piano) whose performances add to the band’s firepower.

2008’s eponymous debut album set the tone for what they could do in the studio – a rip-roaring party, bursting with fun and good humour. From it, the single ‘Jolie Coquine’ went on to define the electro-swing sound, while the parent album launched the band globally, charting in their native France and staying for weeks in the iTunes Top 100 in numerous countries. They toured and toured, across the US and Europe, building a roots following just as the original jazz bands did in the pre-YouTube, pre-MTV, pre-rock’n’roll age.

The second album, 2012’s ‘Panic’, was a little more experimental, still hugely tuneful and accessible, but exploring what the band were capable of. It remains a treat to listen to, whether in a burlesque bar or at home, from the stoned swing of opener ‘Queens’ to the cute, shuffling, sci-fi ballad ‘Sydney’ at its end.

Caravan Palace are currently putting the finishing touches to their new album (scheduled for an autumn release). No teasers have been shared yet – but there’s one guarantee: that their audience will have a spectacularly good time and that the music they record is of the finest quality.