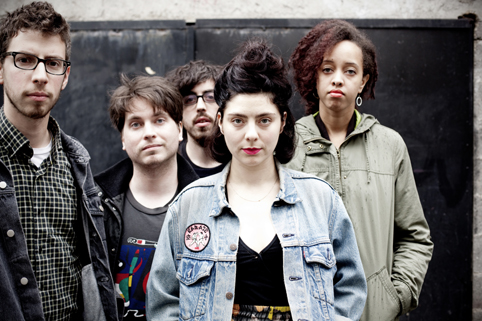 “...addictive…listening to Ava Luna play off of each others’ quirks here is intoxicating.” Pitchfork

“Infinite House sounds fantastic — polished and sturdy, thanks in part to Dave Fridmann’s mixing work — but it gets most interesting when it jumps out of its own smooth skin.”  Consequence of Sound

“This is music that lets you in…a line of seduction songs stretched between Al Green and Prince.”  The New York Times

“Ava Luna are quirky and confident, mysterious and compelling. Their compositions are gleefully loose rock interpretations, postmodern soul tunes perched on the line between brilliance and the abyss.”  The Village Voice

New York’s favorite ‘nervous soul’ outfit, Ava Luna began in 2007 when Carlos Hernandez, then a music composition student, set out to combine the heartfelt soul of Sly Stone and Shuggie Otis with the raw intensity of bands like Wire and The Raincoats.  After self-releasing several EPs, their debut LP Ice Level was released in 2012 to a groundswell of support, lauded by Spin as “ice-cool vintage ’80s no wave grooves and extra-lush three-part girl group harmonies,” and by Pitchfork as “glorious.”

Playing 100+ shows in support of Ice Level, the band solidified its current lineup – Carlos Hernandez,  Becca Kauffman, Felicia Douglass, Ethan Bassford and Julian Fader – and signed to Western Vinyl.  Sophomore LP Electric Balloon released in 2014, earned still more critical acclaim.Back for more in 2015, Infinite House adds a surrealistic storytelling element to their established sound, bringing the members of Ava Luna from the far end of Flatbush Avenue in Brooklyn to the woods of Mississippi; from the seat of the mundane, to the hexagonal labyrinths of Borges’s Library of Babel. Recorded by the band and mixed by Dave Fridmann (Flaming Lips, Sleater-Kinney), whose legendary touch firmly seals these sounds in the realm of the thaumaturgical, it is their most polished, complete recording to date. With trademark intensity, mirthful humor, and taut angularity firmly in place, the mysteries of Infinite House unravel slowly, even as the songs throw your ass from its seat.

We’ve heard Carlos Hernandez’s on the track, “Billz” and Felicia Douglass on “Coat Of Shellac” and now it’s Becca Kauffman’s turn on “Steve Polyester”.  Stereogum describes it as “a kaleidoscopic narrative story told through spoken-word, as comical as it is confounding.”

Infinite House will be released in the UK on 4th May on Western Vinyl.