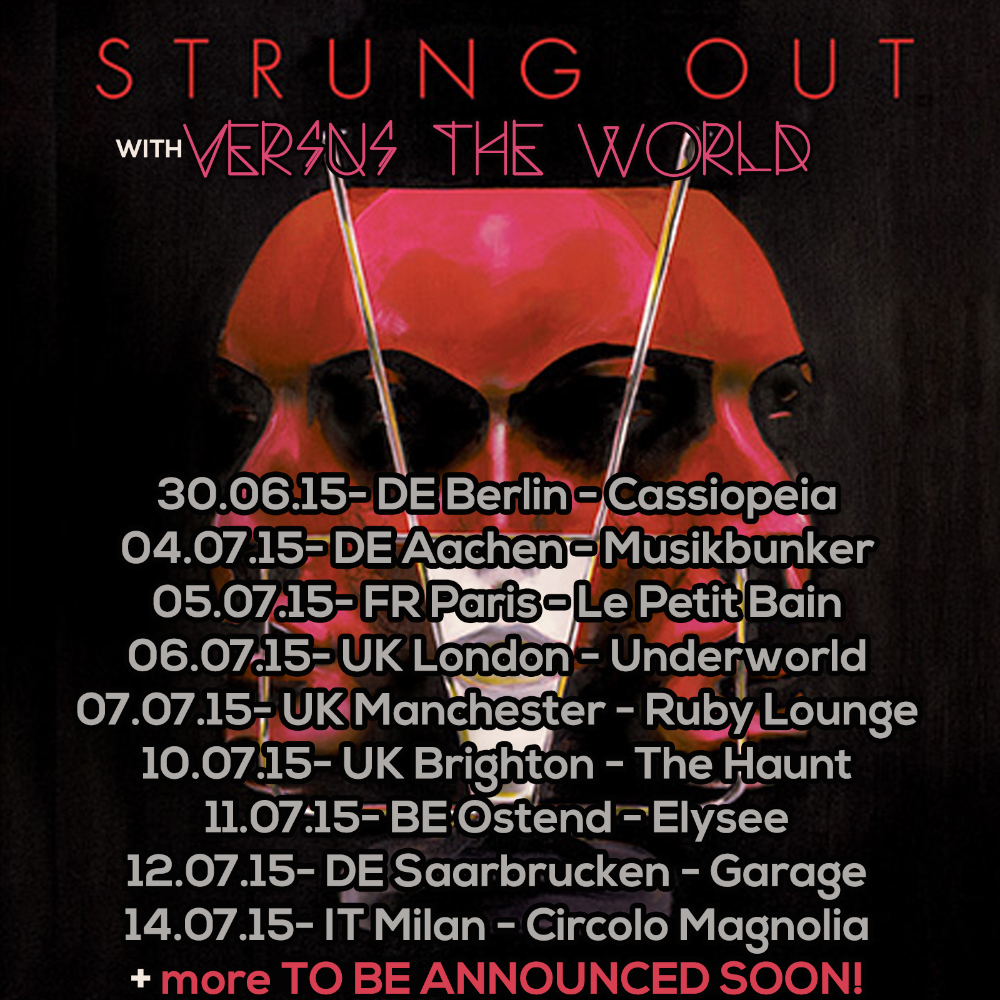 Versus The World, the Santa Barbara, California based Pop Punk quintet will be hitting the UK/EU with Strung Out throughout the summer – In support of their new album “Homesick/Roadsick” – Out June 23rd Through Kung Fu Records

VERSUS THE WORLD:
There’s an unshakable bond that can only be forged through a combination of shared passion, life experiences, and world travel hardened camaraderie. It’s not really something tangible, touchable or scientifically provable. But if that electric chemistry that makes friends into family has a sound, that sound is definitely VERSUS THE WORLD.

The appropriately titled Homesick/Roadsick is Versus The World coming full circle, a third album supercharged by a triple-guitar attack and filled with all of the urgency, earnestness and restlessly adventurous spirit the album’s title represents. The thrilling paradox of wishing for a familiar bed on tour only to yearn to get back on the road after coming home spills out of Homesick/Roadsick with powerful drive and renewed focus.

The dense pop-punk pedigree of Versus The World is the foundation for the some of the most exciting post-hardcore troubadour jams to ever emerge from the West Coast. The floorshow style energy of Hot Water Music, the darkly romantic but uplifting melodicism of Alkaline Trio, and the modern-but-timeless singer/songwriter DNA found in Gaslight Anthem collide within Versus The World, whose own signature sound is further enhanced by the group’s individual resumes, which include The Ataris and Lagwagon.

Dave Hause guests on the album opener, “Santa Margarita,” which vocalist/guitarist Donald Spence wrote for fallen friend Tony Sly, the late frontman for No Use For A Name. “The Black Ocean” was born from a combination of a sound check riff and the view from the plane on an overnight flight to Japan. Homesick/Roadsick is the first Versus The World record where Spence shared the writing responsibility, collaborating with guitarist Tony Caraffa on songs like “A Storm Like Me,” “A Brooklyn Rooftop” and the title track. The band rehearsed “Our Song” for the very first time in the studio.

Familiarity and family remain at the forefront for Versus The World. They’ve made all three albums with Bad Astronaut guitarist and producer Thom Flowers. Drink.Sing.Live.Love (2012) and the new release Homesick/Roadsick were mixed by Ian MacGregor, whose discography includes work with Katy Perry and All-American Rejects. They’re back with Kung Fu Records, the label that released Versus The World’s self-titled debut in 2005. The long-running SoCal punk institution is also the label that first discovered The Ataris.

Mike Davenport played bass for The Ataris during the late ‘90s and early 2000s, lending his talents and stage presence to genre-classics Blue Skies, Broken Hearts…, Next 12 Exits, End Is Forever and the gold-certified mainstream breakthrough, So Long, Astoria. He met teenaged singer/songwriter and Ataris fan Donald Spence in Texas and casually told him to feel free to visit the band owned indie record store in Santa Barbara sometime. The next year, Spence ran away from home and scored at job at that very record store, Down On Haley, where the pair started Versus The World in the backroom.

Thanks to the strength of Spence’s songs and the positive reception to their debut, Versus The World grew from a side project to a real-deal band and put in significant road miles on tours with Social Distortion, Bouncing Souls, The Vandals and the Vans Warped Tour, among others. During the much-needed downtime that followed, Davenport started Cave Mummy with Lagwagon cofounder/virtuoso guitarist Chris Flippin. Spence had a “home project” too, Crooks & Liars, with drummer Bryan Charlson, whose ferocity behind the kit runs in hilarious contrast to his laid back Hawaiian vibes.

Flippin and Charlson were members of Versus The World by the time the group teamed with Fletcher Dragge from Pennywise (and a few other industry vets) for the release and subsequent promotion of their second album. With Flippin still a full-time member of Lagwagon, the band would often draft Murderland guitarist Tony Caraffa to fill-in during the increasing touring that followed, which included US tours with MxPx and Unwritten Law, Japanese dates with Useless ID, a trip to China, and to Australia’s Soundwave.

Midwest metal shredder Caraffa became a full-time member, elevating the band to an Iron Maiden style triple guitar status, which is put to incredible and inventive use on what is surely Versus The World’s most invigorating and confident full-length thus far. The hard-hitting heft of the first album and the dynamic diversity of the second are not only present but turbo-boosted all over Homesick/Roadsick. The end result is the penultimate expression of the musical and personal experiences of each member.

Anyone who gets a charge from the subcultural sound of songs driven by purposeful power is invited to dive into the fan community supporting Versus The World, just like that invitation teenaged Donald Spence accepted that started it all.