Elaborate guitar based math-rock from Denmark

Due out 25th May 2015 via Small Pond Recordings

“The bass-heavy blast toggles between eerie, tension-building passages and riff-driven eruptions, juggling chord changes and time signatures like chainsaws all the while.” – Stereogum

More than two years have passed since the riff-forging Danes of Town Portal released their debut album Chronopoly; a cult favorite among math connoisseurs and nerdy alt. rock fans alike, but a well-kept secret to most. May 2015 finally sees the release of the follow-up The Occident, honing familiar expressions into a refined, darker aesthetics that merges adventurous complexity with measured temperance.

The road to this album has been long: an increasingly intense and, at times, seemingly directionless excavation of musical feedstock from the depth of three geeky minds; a group of weathered fishermen angling in the musical ocean to see what deep-sea dwellers they might pull to the surface, lest they be pulled down with them. While decrypting and rearranging the continuous haul of musical fragments reeled in, the band witnessed both the beginning and completion of an artificial alpine skiing slope and vast residential constructions now surrounding the small portable cabin in the outskirts of Copenhagen, in which the album was composed and finally recorded. The challenge however, wasn’t the lack of inspiration or vision but the abundance of ideas and ambition. Thankfully the result honors these efforts.

Where Chronopoly was an album obsessed with the abundant, the eccentric and the bombastic, The Occident expands and inverts the subject of fascination. Rather than fixating a gaze at the fireworks in the sky, this album toys with the magical potential of even the dullest object that, if turned to reflect the light in different ways, inspires fundamentally different perceptions. The rhythmic complexities that have come to characterize the band’s efforts are not less adventurous, but have taken on a grounded, heavily synchronized and almost tectonic quality that allows heavy head bobbing even to the most intricate of systems. The harmonies and melodies explore themes of repetition, monotony, sequence and patterns, yielding new, darker expansions of the melodic palette of the band, without ever resorting to widely favored romantic post-rock chord progressions. Instead The Occident sounds more like a record translating the influence of bands like Shiner, Hum and Polvo into a drop tuned and heavily syncopated realm of almost Meshuggah-like stringency. Rather than creating something merely alienating, the aim has been to strike the perfect balance between unpredictability and listenability and to develop narratives capable of transmitting something other than grandeur or solemnity.

The ability of instrumental music to convey readily decipherable meaning is limited. However, the context of ideas and themes in which songs are created can permeate the music, making it the carrier of more abstract notions of meaning. On Town Portal’s second album, that notion is the Occident. Not as a political comment on colonialism or as the geographical or cultural counterpart to the Orient, but as a look at our western culture through the imagined viewpoint of a cyber-archeologist in a far distant future piecing together a picture of an era from random artifacts pulled from an overflowing data ocean. A legend based as much on spam-email, pop-ups or mindfulness-pamphlets as on the cultural beacons of our time.

The Occident was recorded by guitarist Christian Henrik Ankerstjerne and mixed/ mastered by Carl Amburn (Riddle of Steel, Traindodge, Self-Evident). It releases digitally and on vinyl through Small Pond Recordings (UK) and Subsuburban (Denmark and the rest of the world) on May 25th 2015. 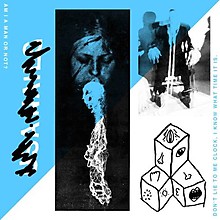