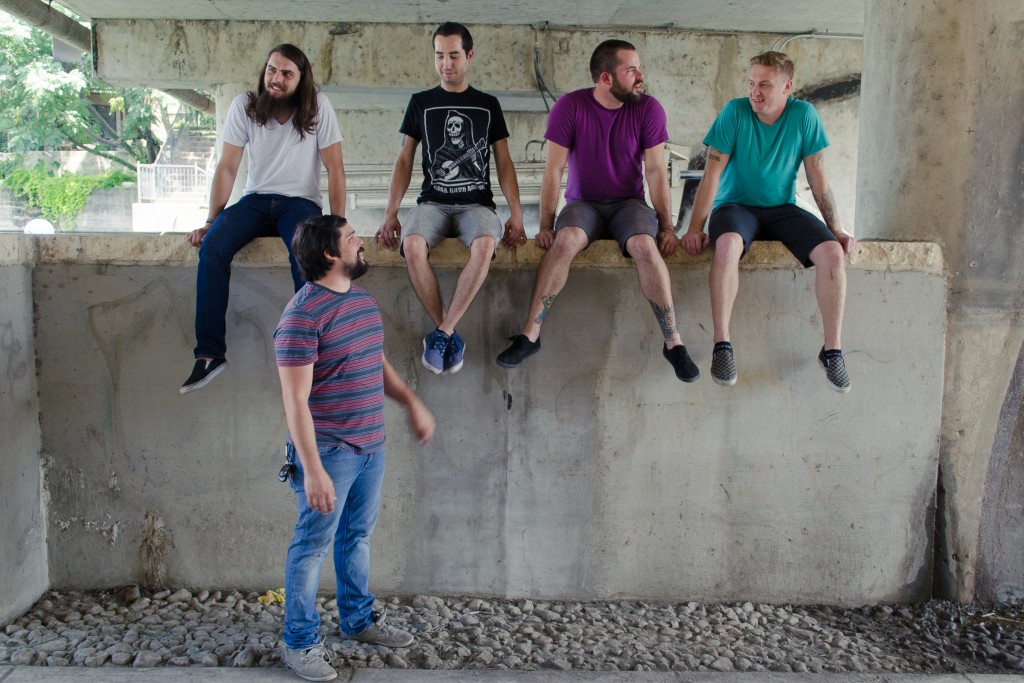 San Antonio’s Bright Like The Sun are sharing their certifiably epic sophomore album, the self-titled “Bright Like The Sun” on Brooklyn Vegan, a week ahead of its release. As with any triumphant post-rock album, Bright Like The Sun is best enjoyed in full, unfolding with enormous riffs and gorgeous landscapes of crashing waves and wistful tranquility. Produced by This Will Destroy You’s Alex Bhore, the record is due out on April 21st via Sun Sea Sky Productions (pre-order). Bright Like The Sun create post-rock music with nuance from powerful washes of guitars and the band’s haunting use of vocals as another instrumental layer to the inclusion of instruments not commonly associated with the genre. Their music is epic, dissolving the lines between powerful and meditative, creating something that’s both brains and brawn.

Brooklyn Vegan premiered the full stream of the album, noting Bright Like The Sun’s “knack for lush atmospheres, well-crafted dynamic shifts, and climactic crescendos,” while earning comparisons to fellow Texas post-rock luminaries This Will Destroy You, whose Alex Bhore produced the album together with the band at Elmwood in Dallas.

Bright Like The Sun’s Chris Etheredge shared some insight into the record and the band’s evolution since their debut:

“This record took a lot longer to write for a number of reasons, not least of which was the addition of a fifth member and the shuffling around of players that came along with that. I think where the first record established a foundation for us, we looked at this one as a chance to shape our identity, build upon that sound and bring in a few different elements. We focused a lot on structuring the songs, layering the elements and making sure that everybody’s role was in sync with the other and becoming intimately familiar with how each instrument affected the other. The addition of vocals to this record is a pretty dramatic change, but actually came about fairly late in the process. It wasn’t a conscious decision, we just started to notice some holes in songs and that happened to be the patch that filled it. Overall, I would say that this record is a more mature effort, far more refined and less “obvious” in the typical post-rock sense. Frankly, I’m not even sure it’s post-rock anymore. ”

Bright Like The Sun carries a great deal of restraint, keeping with a mellow approach to the post-rock spectrum, a beautifully meditative sound that joins together the genre’s slow builds with unique flourishes of Rhodes keyboards, synths, and even the occasional horn accompaniment. Their cinematic sound retains a futuristic quality. Heavily instrumental, Bright Like The Sun are able to manipulate moods with extended passages of serene beauty and gargantuan moments of enveloping sound. With influences ranging from M83 and New Order to The Beach Boys and Cave In, it’s safe to say Bright Like The Sun have a definite diversity to their music.

STREAM BRIGHT LIKE THE SUN VIA BROOKLYN VEGAN:
http://www.brooklynvegan.com/archives/2015/04/listen_to_texas.html

Texas has always had a profound effect on its musicians. Whether made evident through identity, personality, tradition or sound, it is apparent in all cases that bands from Texas are shaped from and heavily influenced by the Lone Star State – Bright Like The Sun is no exception. Born in early 2012 from the collective desire to make beautiful, thought provoking, and at times, chaotic music. Their songs build in waves, moving from barely audible echoes and haunting vocals to walls of guitars more closely compared to a symphony of noise than to a rock band.

They are known for their extensive use of effects pedals and their incorporation of non-traditional instrumentation (most notably the Wurlitzer and Rhodes electric pianos, brass, and electronic synthesis).