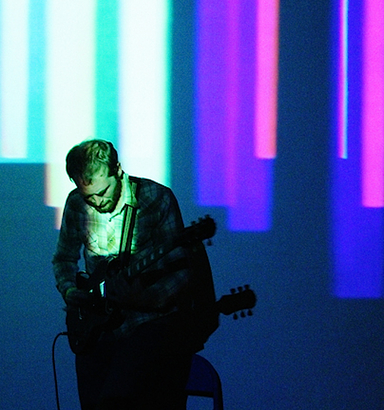 KEN CAMDEN ANNOUNCES NEW ALBUM, DREAM MEMORY DUE OUT ON KRANKY JUNE 15TH,
BRAND NEW TRACK REVEALED
Ahead of the June 15th release of Dream Memory, we are able to bring you an ear-catching example of the kind of guitar movements thatKen Camden has refined over two wondrous prior solo albums for Kranky.
Flocks of loose electronic pulses and fluttering signals of solar radiation seem to work their way in to the pickups of Camden’s guitar, creating a deep and utterly transformative soundscape on “Curiosity” that suggests so much in its ambiguity, playful in short bursts, melancholic as it extends. Distinctly detached from its instrument origin, Camden’s methodology utilises both a steel slide and e-bow technique, and Dream Memory sees the Chicago artist move into micro-tonal territory to bridge the textural gap between guitar and synthesiser, while examining their inherent differences and qualities.
The palette is further broadened on Dream Memory by introducing an organic vocal sampling machine described as a Vocaltron. Much like a Mellotron, vocal samples (contributed by Emily Elhaj and Angel Olsen) are chromatically organised in half steps from the lowest note to the highest possible. Each set is specific to the contributor’s range and each note is unedited to keep all original characteristics of that particular individual’s voice. This organised organic information fed in to the music adds a contrast to the electric guitar and synthesiser arrangements on the album.
The development of all of these systems gives Dream Memory a diversity throughout its tracks while maintaining an atmospheric bond that weaves the ideas into a thematic whole.