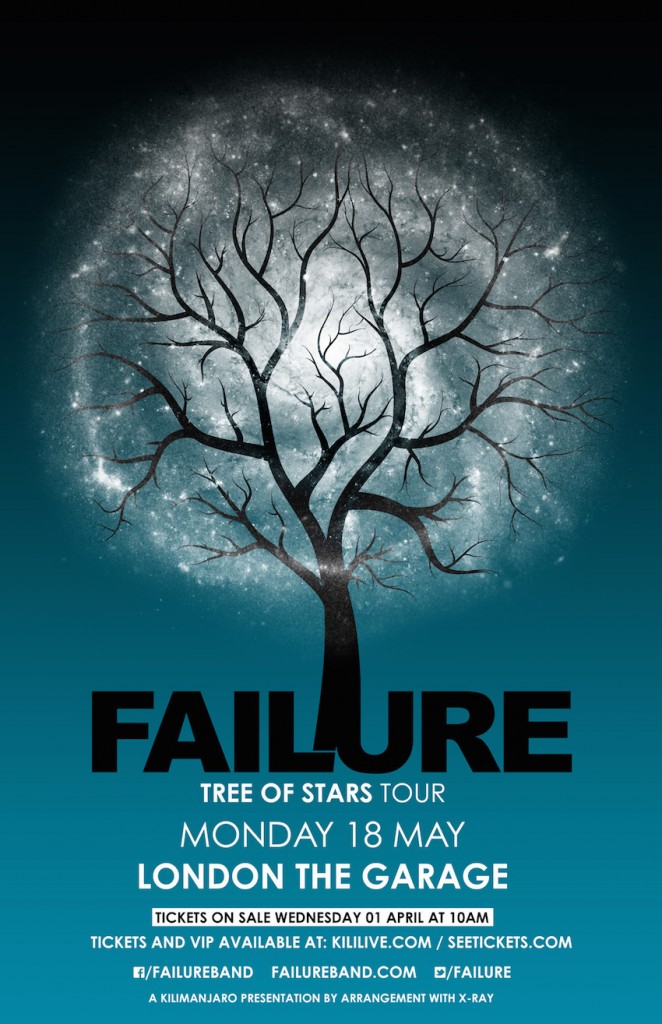 Inimitable alternative rock band Failure have announced a special appearance at the Relentless Garage, London on Monday May 18th 2015. This event will mark the band’s first performance on UK soil in 20 years. Tickets will go on sale at 10am Wednesday 1st April from http://www.kililive.com/
A limited number of VIP tickets will be available, which will include soundcheck access, a meet and greet with the band, a photo with the band, a special Failure UK VIP laminate and priority access to the merch stall and venue.
Multi-instrumentalist and vocalist Ken Andrews had this to say about their return to the UK: “So much of the England’s musical history is in the DNA of Failure’s sound.  After 17 years away, we’ve spent the last year finding our feet again as a live band as well as writing and recording our new album, The Heart is a Monster.  We’re in the best form of our career and we’re now ready to bring Failure back to the UK for what is the first of many shows to come.”
Failure are currently in the studio working on the follow-up to their critically acclaimed album Fantastic Planet. The album, entitled The Heart Is A Monster, is scheduled for release later in 2015. The band launched a Pledge campaign for the forthcoming studio release and have blown away expectations with a huge uptake from Failure fans across the world. The band also recently announced the vinyl reissue of Fantastic Planet, available exclusively via PledgeMusic. More information is available here: http://www.pledgemusic.com/failure
Failure returned from a 17-year hiatus in early 2014 with a single Los Angeles date planned. The show sold out in seconds, which led to a North American tour, including a run of dates with Tool, and eventually back to the studio. In a recent interview with Noisey, Andrews admits by the time the band announced their first live outing, he, Greg Edwards and drummer Kellii Scott were already working on new music, saying “One thing that Greg and I agreed on very early on, is that we did not want to reform for just one or two nostalgia tours. We wanted to come back as a full functioning musical force and creatively pick up where we left off with Fantastic Planet. That meant we needed to start experimenting in the studio first, which we did in late 2013. After a few months, we came to the conclusion that we were really enjoying the process, the results were definitely Failure, and we were quite proud the new material. Basically, we’ve been chipping away at a new album this whole time.”
Failure formed in Los Angeles in the early ‘90s, releasing Comfort, their debut album, in 1992 via Slash Records. Magnified followed in the spring of 1994 with the band’s final offering, Fantastic Planet, released in 1996. Fantastic Planet earned a perfect 5-star score from Alternative Press with the magazine saying the album was able “to breathe life into the corpse of contemporary, guitar-driven rock,” adding that the band was “willing to stretch the  definition of both their instruments and their songs.” The 17-track album is considered one of the era’s most influential and enduring rock records.  Over the years, Failure has become known as a “band’s band” whose songs have been covered by such diverse artists as A Perfect Circle (“The Nurse Who Loved Me”) and Paramore (“Stuck On You). Tool/A Perfect Circle singer Maynard James Keenan said “Failure has been a huge inspiration to me. They say amateurs borrow and professionals steal. Well over the years this pro has robbed those poor saps blind.”
Failure is Ken Andrews, Greg Edwards and Kellii Scott.
www.failureband.com
www.facebook.com/failure
www.twitter.com/failure