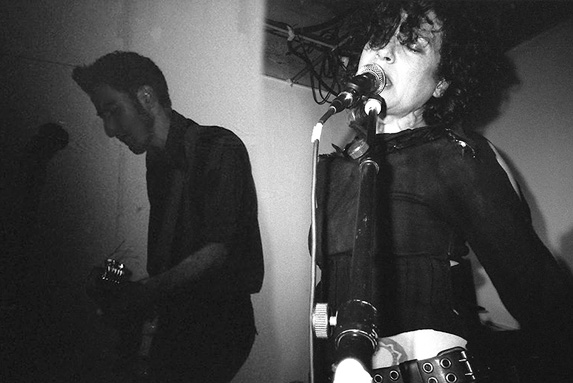 CARLA BOZULICH UPCOMING UK TOUR THIS APRIL
Carla Bozulich will be performing a trio of headlining dates in the UK during mid April in collaboration with Don The Tiger,  presenting new material, as well as revisiting work from last years’ stunning LP Boy (Constellation Records).
Hints Bozulich of the upcoming live shows: “I’m really excited about bringing new material. Songs. A lot of true unfucked-with voice. A Scottish lament. Some Evangelista and Bozulich stripped to the bones...”
CARLA BOZULICH AND DON THE TIGER LIVE:
17.04.15 – Edinburgh, UK – Wee Red Bar
18.04.15 – Salford, UK – Islington Mill
19.04.15 – London, UK – Cafe OTO
Watch the videos for ‘One Hard Man’ and the more recently released ‘Deeper Than The Well’  and read on for more information about Boy…
Time and again Carla has headed up bands that sound like nothing else and arguably stake out genres unto themselves. Boy is Carla’s self-proclaimed “pop record” and that claim makes perfect sense, framed within the context of her unique musical career of experimentation, exposition and deconstruction.
Boy is a refreshing and much-needed reminder of what pop – as an oblique angle, influence, and intent – can do in the hands of a ferociously commanding singer/lyricist who has cut her teeth on genre-bending, genre–blending, and DIY aesthetics. Bozulich says she was “resuscitated” in her teenage years by punk rock, and then “destroyed, in a good way” by people re-inventing the idea of how music works. Here is a batch of ten songs that clock in at 3-5 minutes each, mostly hewing to recognizable structures of verse, chorus and bridge, but full of destabilising accents and strategies, and nothing that could read as winking irony, gloss or mere effect/affect.
The songs are grounded by hooks and melodies, delivered by the singing itself, with the underlying instrumentation and arrangements always in the service of Carla’s voice and lyrics – in that respect, there is a strong through-line from the Evangelista albums. But Boy sharpens and focuses each song’s intent and structure; unlike most of the Evangelista work, this new album, apart from a song or two, would not be mistaken for sound art, dark ambient, or quasi-Industrial music.

“If Boy emerged from the oeuvre of a broadsheet-friendly icon such as Nick Cave, Patti Smith or Tom Waits it would be lauded as an uncompromising work of genius.”  – SUNDAY TIMES CULTURE

“This is a really great freakin’ record.” – THE NEEDLE DROP

“A landscape where Tom Waits and Michael Gira enjoy critical tongue-baths ought to make room for Carla.” – NME

“On Boy, Bozulich has pulled the word ‘pop’ back from the abyss of meaninglessness. Her most accessible record in some time, though her use of recognizable genre, melody, rhythm, and harmony, shatters conventional notions. Searing, raw and lusty, tender, open and vulnerable.” – ALLMUSIC (4.5 stars)

“Boy is filled with memorable songs that are full-muscled enough to withstand whatever level of barbed deconstruction that Bozulich throws at them…At her best, Bozulich uses the vernacular song forms of country, blues, and yes, even “pop”, to tap into something that feels much more elemental, a vein of primitive emotion that feels like it could pre-date the notion of musical genres entirely.” – PITCHFORK
cstrecords.com
carlabozulich.com