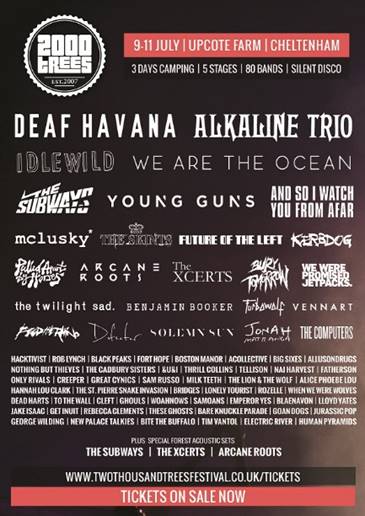 The best place to discover your new favourite band

American punk rock legends ALKALINE TRIO will headline the 2000trees Festival main stage and MCLUSKY* will top the bill in The Cave, both on Saturday night.

“To say we’re delighted is a massive understatement, because for many rock fans Alkaline Trio defined a summer with their album ‘From here to Infirmary’ and songs like Private eye and Stupid Kid are pop-punk anthems known the world over,” said organiser Andy Rea.

“In fact we’re proud of the outright brilliance of all the acts across our line-up and it is undoubtedly the best we’ve ever had in terms of diversity across six stages, from internationally famous names to local heroes.”

Three-day tickets for the award-winning 2000trees Festival are close to selling out and organisers confidently predict the event will sell out before it celebrates its ninth year near Cheltenham, on 9-11 July.

Other acts among the 100-strong bill include Idlewild, We Are The Ocean, Young Guns, And So I Watch You From Afar, The Skints, Kerbdog, Pulled Apart By Horses, Arcane Roots, The Xcerts, Bury Tomorrow, The Twilight Sad, We Were Promised Jetpacks, Turbowolf, Feed the Rhino and Defeater.

“There are only 52 weekends a year and we are making sure that July 9-11 counts for those lucky enough to get hold of a ticket for 2000trees, it’s going to be one hell of a show!” said organiser Si Maltas.

Affectionately known as ‘Trees’ by fans, the event was described as “the best festival in the UK” by Soundboard, a “magnificent weekend” by Rock Sound magazine and “one of the best small festivals in the UK” by The Guardian.

Tickets and more information are available at www.twothousandtreesfestival.co.uk