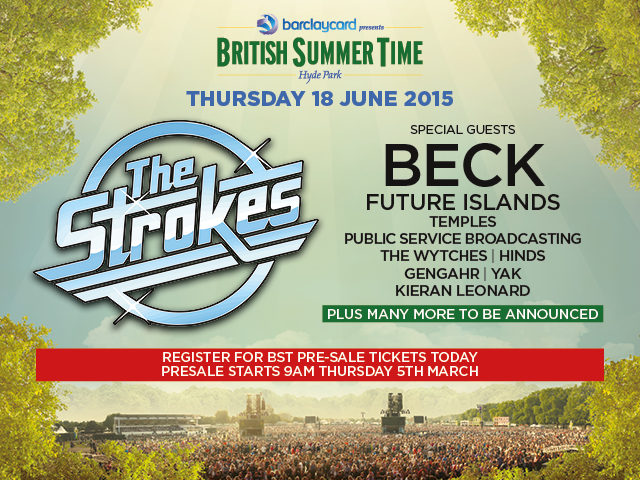 plus full supporting line up

The Strokes join headliners Blur, Kylie Minogue, The Who and Taylor Swift for the event of the summer, with more to be announced.

THE STROKES, one of indie rock’s defining and most influential bands are the fifth headliner announced for Barclaycard presents British Summer Time Hyde Park 2015.

Since their 2001 debut, THE STROKES have been a musical inspiration for the UK’s best and brightest. They have been cited as triggering a sea change of mainstream culture. It is a testament to their influence that the likes of the Arctic Monkeys, Adele, The Killers and many others have covered their work.

Very special guest is the Grammy Award winning BECK. Since his worldwide smash “Loser” in 1994, Beck has gone on to release 12 albums and is now considered to be one of the greatest modern songwriters of his generation. In addition to recording his solo work, Beck is also producer and collaborator to a wealth of artists as diverse as his songwriting, including: Childish Gambino, Sia, Charlotte Gainsbourg and Bat For Lashes. Last year saw him release his latest album “Morning Phase”, to widespread critical acclaim, and was crowned Album of the Year and Rock Album of the Year at this year’s Grammy Awards.

Joining The Strokes and Beck are FUTURE ISLANDS. With their stand out track ‘Seasons (Waiting On You)’ topping NME, Pitchfork, Spin, Consequence Of Sound and Guardian’s  “Track Of 2014′ list, they make a triumphant return to the main stage, following their spellbinding performance at last year’s Barclaycard presents British Summer Time Hyde Park.

AEG Live, The Royal Parks and Barclaycard are proud to present the third year of this unique and world-class event. Having royally entertained hundreds of thousands of fans over the past two years, 2015 will be no exception. As well as the huge ticketed headliners, the midweek activities will return with free access for park visitors to enjoy film, music, sport and literature.

Jim King, Senior Vice President Live Events, says: “It’s hugely exciting to have The Strokes back in London for a UK festival exclusive. They’ve handpicked a great support bill and it’s going to be an amazing night out. With such a great catalogue of hits as well as some new music this is unmissable for music fans”

Liz Mullins Director of Events at The Royal Parks, said: “Since it began in 2013 Barclaycard presents British Summer Time Hyde Park has become a firm favourite in the events calendar, bringing a diverse range of entertainment and the world’s biggest artists to this iconic park. From The Rolling Stones to Black Sabbath, Lionel Richie to Tom Jones, comedy nights and family days there has been something for everyone. We are looking forward to working with our partners AEG Live to once again bring this truly unique event to Hyde Park.”