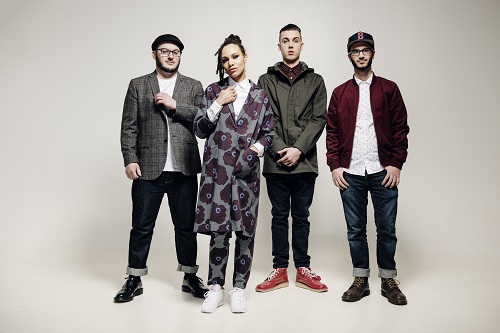 Robert Elms sums up the spirit of East London reggae four-piece The Skints, whose third album, ‘FM’, is out now on Easy Star Records.

Debuting at an impressive no. 7 on the Independent Album Chart and no. 51 on the UK Official Album Chart, ‘FM’’s commercial success so far also saw it billed as the highest selling reggae record in the UK in its first week. This follows support from the likes of Radio 1Xtra’s David Rodigan, The Guardian, who previously summarised their style brilliantly as ‘fusing a skanking beat with lyrics which speak clearly about everyday life in the UK.’

With ‘FM’, listeners will hear a band that has come a long way from their humble beginnings as punk ragga urchins. Having left the squats behind, they’ve been regularly performing at Europe’s largest festivals and on London’s most renowned stages since the success of their debut album ‘Live. Breathe. Build. Believe’ in 2010.

To celebrate the release of ‘FM’, the group will be returning to Europe with support from tropical pop-dub singer-songwriter Hollie Cook. Hollie rose to fame following her self-titled 2011 album, which introduced her as one of the most exciting new female talents on the London scene. Having featured on the prestigious ‘Later….with Jools Holland’, she also recorded a special live session at BBC Radio 1’s Maida Vale with Prince Fatty, Horseman and The Skints in 2013, where she played exclusive material from her second album.

Beginning in France, which will see the four-piece take in Paris’ coveted concert venue La Maroquinerie amongst others, the tour will move to Belgium’s Aarschot De Klinker before travelling to Germany and the Netherlands. The troupe will then head homewards to begin the UK leg of the tour, with a performance at Norwich Epic Studios on 13th April.
Culminating in an exciting show at London’s 02 Shepherd’s Bush Empire on 21st April, the band will then prepare for their highly anticipated stateside debut in May.

A group renowned for their live performance credentials, having finished 2014 on the road with the Jägermeister Music Tour alongside Me First and The Gimme Gimmes, The Skints truly show no signs of slowing down. In taking to the road again to promote a comprehensive piece of work that continues to showcase the accessible blend of Caribbean styles with an East London twist for which they have become famed, this group of reggae-dub upstarts have truly hit the big-time.