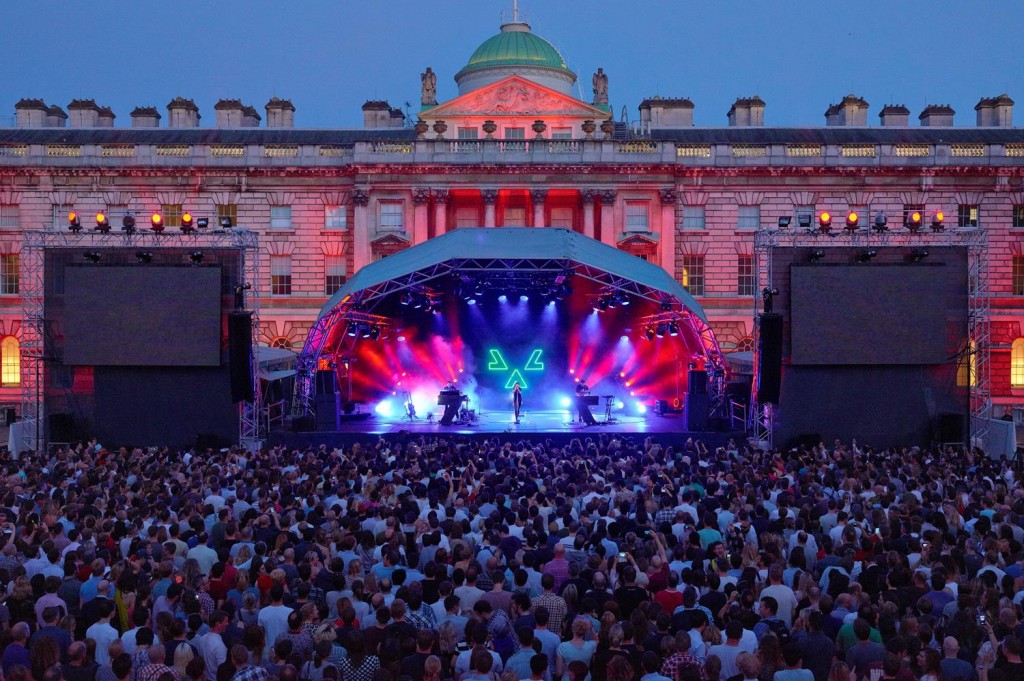 Set in one of London’s most iconic landmarks, Summer Series at Somerset House with American Express® returns this year for 11 nights from 9 – 19 July 2015.

London’s intimate live music festival will play host to a typically diverse and impressive array of headline artists alongside a selection of hotly tipped emerging acts.

Chromeo will open the Summer Series with their incredibly infectious, disco-tinged funk. Led by David Macklovitch and Patrick Gemayel, Chromeo’s sleek synth back catalogue will be sure to kick-start a dance-floor frenzy, setting the tone for a programme that is rich in diversity.

From Jay-Z to The Rolling Stones, Ed Sheeran to Eric Clapton, there aren’t many artists that guitar virtuoso Gary Clark Jr. hasn’t collaborated with. His debut album Blak And Blu saw him become the first artist ever to receive Grammy Award nominations in both the rock and R&B categories for the same album in the same year, winning the latter. With musical influences including blues, soul, pop, punk and hip-hop, Gary Clark Jr.’s passionate performance-style is sure to captivate audiences.

Passenger will headline the third evening of Summer Series with their lyrical folk musings. On the back of ‘Let It Go’, Passenger has gone on to make an resounding impression, reaching the Top 5 in the Billboard chart, with ‘All Of The Lights’ going on to receive double platinum status. Credentials aside, Somerset House will provide an enchanting backdrop for Mike Rosenberg’s heartbreakingly beautiful music.

One of Jamaica’s biggest selling artists, Chronixx adds a burst of Caribbean energy to the bill on 12 July. With his unique fusion of reggae, dance-hall and clever lyrics he will no doubt be one of the series’ most unforgettable performers.

On 13 July George Ezra will bring his blissful baritone vocals to the courtyard. With 2.5 million album sales, a top 5 album, 3 sold out UK tours and 4 BRIT nominations, Ezra is clearly a tour-de-force in the music industry today.

Former Portico Quartet member, and Mercury Nominated artist, Nick Mulvey takes to the stage on 14 July. Mulvey’s uniquely scored, atmospheric tracks are sure to mesmerise within the stunning setting of Somerset House.

Australian duo Angus & Julia Stone’s sound has now transcended across the world, garnering plaudits from all over. Their latest album, produced by one of the world’s most revered producers, Rick Rubin, has cemented the duo’s stance in today’s current scene. This show is sure to be welcomed by music lovers far and wide.

On 16 July James Bay will be lighting up the courtyard stage with tracks from his emotive and powerful debut. Hotly tipped by many, a BRITs Critic’s Choice Award winner and included in the BBC sound poll, it’s fair to say that 2015 is already proving to be the young troubadour’s year.

The following evening will see Kwabs, aka Kwabena Adjepong, commandeer the headline slot. Blending an array of genres, anchored by an emotive, baritone vocal, Kwabs’ innovative sound is sure to be a memorable addition to this year’s series.

Returning to Somerset House after a sold-out performance in 2004, indie stalwarts Belle & Sebastian will close the penultimate night of the series. Fans will be delighted to hear them perform many of their biggest hits alongside gems from their current album ‘Girls In Peace Time Want To Dance’. 18 July is sure to be a night to remember from one of the UK’s most established and widely adored acts.

Summer Series will close proceedings with the almighty Jessie J. Known for her chart dominating success and colossal collaborations, Jessie J will see out the programme in style, promising an unforgettable finale.