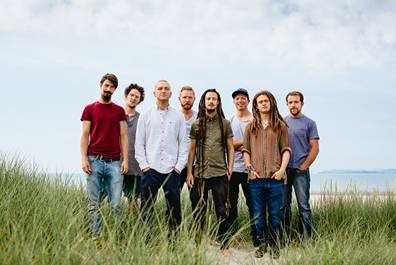 “Truly infectious” – The Crack
Eight-piece funky reggae outfit Backbeat Soundsystem are proud to reveal their new video to ‘Come Undone’, in support of their debut album ‘Together Not Apart’, released late last year on Easy Star Records.
The band will be releasing a brand new video for recent album track ‘Come Undone’ in anticipation of their upcoming UK tour. The song and its video emphasise the shared responsibility in society, showcasing the group’s penchant for crafting culturally informed lyrics, as lead singer Dean Forrest explains: ‘We wanted to make something a bit darker this time, reflecting the more serious undertones of the track. The video echoes the song’s cathartic journey of reaching tipping point, and then starting anew.’
Backbeat Soundsystem build upon the conscious social commentary championed by the reggae tradition, and ‘Come Undone’ addresses the mistake of inaction in the face of malevolent forces and emphasises our shared responsibility in building a better future. This philosophy of reflection and union is apparent throughout their debut album, which casts a critical eye on social inadequacy and presents the inclusive idea of community as a solution.
The UK tour celebrates an album dedicated to their fans, who pulled together to provide funds and triple the initial target for the project on Kickstarter. It is this level of support from their admirers that allows them to tour some of the UK’s greatest independent venues, and will see them showcase their reputation as a considerable live force. Not only have the collective been backed by their core following, the eight-piece have also won the hearts of major UK tastemakers including the likes of Echoes, The Crack and Guestlist.
Since forming in the charming Cornish idyll of St Austell, the reggae outfit has been smashing up stages across the UK, with their energetic live performances having seen them play at some of the most prestigious British festivals. Their ability to fire up audiences of all musical tastes has seen them share bills across the country with the likes of Cypress Hill, Arrested Development, Plan B, Tinie Tempah, The Streets and Dub Pistols.
The tour will commence in Plymouth on 1st April before the band make their way to Bristol and Swindon, followed by a performance at the culturally progressive Passing Clouds in London on 4th April. There will then be a short break before the band travel west down to Exeter and Barnstaple for two nights, while the final leg of the tour will see a live performance in Cardiff before the boys head homeward towards Newquay and Porthtowan.
With the shows promising to deliver lively riddims and stomping bass, Backbeat Soundsystem look set to prove why they were recently praised by David Rodigan on his BBC 1Xtra show as one of the best acts on Britain’s current reggae scene.

DO MAKE SAY THINK SHARE ‘HER EYES ON THE HORIZON’ FROM STUBBORN PERSISTENT ILLUSIONS,