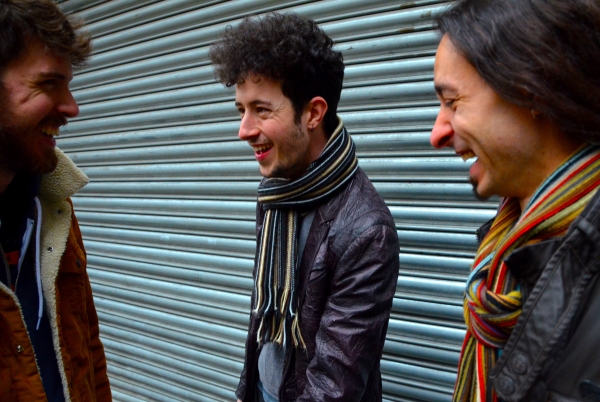 Formidable power-fusion trio NUGGET are releasing a free download of ‘Cheese Meister’, a bleeding-edge cut of progressive instrumental funk taken from the band’s ground-breaking ‘Watercolour EP’, which is out in May.

An extraordinary exploratory composite of jazz, rock and funk, ‘Cheese Meister’ captures the seemingly psychic camaraderie that distinguishes this dexterous guitar, bass and drums three-piece, while insisting the listener comes along for the hugely enjoyable ride. As liberal with time signatures as it is with tempo and type, Cheese Meister’s heart is in the groove, as its irresistible angular refrain is re-energised by each peerless performer all the way to the track’s tumbling coda.

Nugget were formed in London in late 2013 by three virtuoso players, all strikingly young despite their experience, who create an idiosyncratic collage of original jazz-fusion and thrilling math-rock. An assemblage of genuine masters of their instruments, Nugget are prodigious Toronto-born guitarist and producer Julien Baraness, a graduate of Boston’s famed Berklee College of Music; Italian bass instructor Alex Lofoco, who studied at the London Tech; and fellow alumnus, drummer Jamie Murray, who, when not on Nugget duty, serves as a session sticksman at several London studios. The trio’s tunes are technically flawless but always accessible, displaying dynamic and structural clarity while mashing elements of metal, reggae, hip-hop and drum’n’bass. Jaw-dropping to experience live, Nugget have garnered rapturous acclaim at shows in London and the South of France, received endorsements from various pro-audio companies and now, with the release of their debut five-track EP, are ready to commence total cross-pollination of music’s most enduring genres.