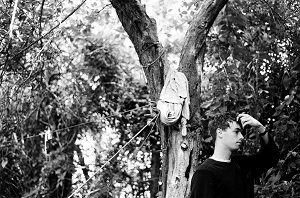 “a blinding swell of humid atmospherics” Dots and Dashes
Junk is proud to present his debut EP, ‘Eyes Shut’, set for release on 9th March through independent London label squareglass.
Utilising both natural and electronic elements to create rich new textures, Junk draws from his classical training and a collection of delicate samples to create lush, swirling atmospherics in this stunning release.
Opening song ‘Eyes Shut’ perfectly encapsulates Junk’s talent for subtly blending versatile soundscapes to haunting effect. Filled with the hazy vocals of singer Amy Spencer (who forms one half of emerging duo Leiik with squareglass signee Bunki), layered electronics, twinkling keys and subtle saxophone build-ups, it’s a beautiful break from conventional production techniques that has already seen the track featured on the likes of Dots and Dashes and Acid Stag.
Opening with spacey sounds, chirping birds, and celestial male choral samples, ‘Over’ is a rich, downtempo gem woven with Amy’s ethereal vocals and understated beats, and is currently being offered as a free download. The downtempo vibe is further reinforced in the calming instrumental ‘Pace By Pace’, with its woody snares and sensual saxophones, as well as in final track ‘State’, whose more minimalist approach was inspired by the likes of Steve Reich, and provides a zen-like conclusion to the EP.
Fellow squareglass signee, The Guardian-approved Semi Precious, will provide a re-working of ‘Pace By Pace’, while Zulu, an established producer with Radio 1 DJ Monki’s imprint Zoo Music, who has also released with Buraka Som Sistema’s label Enchufada, will remix ‘Eyes Shut’.
Junk gathered natural soundscapes for his tracks in and around his home town of Kendal in the Lake District. Meanwhile, his electronic and vocal parts were all recorded in London, where he recently finished his studies at the prestigious Goldsmiths and met label mate Bunki, whose debut EP has featured on the likes of DIY, Artrocker and The 405 of late, and featured a remix of lead track ‘SKTCH’ from Junk himself.
The original artwork has been created by Ben Hall, an illustrator who also hails from the Lake District. As well as being available digitally, the EP will be sold as a limited vinyl, with the artwork taking the form of a special wood-cut print of a structure often found atop hills in their home region.
Using electronic elements as a frame through which more natural sounds are ‘poured’, Junk’s attempts to explore the tensions between acoustic and electronic sound are sure to hit the mark in this commendable debut.
TRACK LISTING
01. EYES SHUT
02. OVER
03. PACE BY PACE
04. STATE
BONUS TRACKS
05. PACE BY PACE (SEMI PRECIOUS EDIT)
06. EYES SHUT (ZULU REMIX)

Listen to this flawless and captivating masterpiece streaming in full below. The EP captures Junk’s creativity and showcases the talent this artist holds, such a promising release and one which you will soon be addicted to –