IS TROPICAL
Black Anything
The New Album
Recorded Across Five Continents, Released in Five Parts on 10” Vinyl
Second Installment – CRUISE CONTROL/SAY 10″, OUT TODAY VIA NYC BASED AXIS MUNDI RECORDS
LISTEN TO ‘SAY‘
UK and European Tour 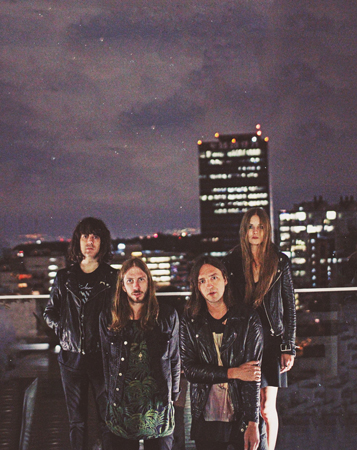 Following the release of the first installment of Black Anything in December 2014 titled ‘Crawl/On My Way‘ 10″, IS TROPICALrelease the second part, ‘Cruise Control/Say’ today via the band’s new label NYC based Axis Mundi Records.
Black Anything Part.2 was recorded in Europe and it is the product of them building up a large collection of field recordings on their extensive travels around the continent, which they then refined and constructed in the semi-desertic lands of southern Spain. After revealing ‘Cruise Control’ a couple of weeks ago, it’s now the turn of ‘Say’, a track that shows a side of IS TROPICAL that we haven’t seen yet.

IS TROPICAL announced a March tour that will see them play in the UK as well as in many European countries. More dates to be announced soon.

18 March – Shapes – London, UK
19 March – Fleche D’Or – Paris, France
20 March – 106 Club – Rouen, France
23 March – Club Banhof Ehrenfeld – Koln, Germany
25 March – Teatro Quirinetta – Rome, Italy
26 March – Tunnel – Milan, Italy
27 March – Covo – Bologna, Italy
28 March – M4Music Festival – Zurich, Switzerland
30 March – Flex – Vienna, Austria
31 March – Rock Cafe – Prague, Czech Republic
01 April – Privatclub – Berlin, Germany
02 April – Uebel & Gefarhlich – Hamburg, Germany
LISTEN TO ‘BLACK ANYTHING – Pt.2’: https://soundcloud.com/istropical/sets/black-anything-pt-2
LISTEN TO ‘BLACK ANYTHING – Pt.1’: https://soundcloud.com/istropical/sets/black-anything-pt-1
IS TROPICAL are set to release their third album Black Anything this year. Originally formed in 2009 as a trio- Dominic Apa, Gary Barber and Simon Milner- the band has now added vocalist Kirstie Fleck, who was featured on the 2013 track “Dancing Anymore.” Working alongside producer and collaborator Luke Smith (Foals, Depeche Mode), IS TROPICAL set out in the summer of 2014 to record across five continents; North America, Africa, Europe, Asia and South America.
The result, Black Anything, will be released in five 10” transparent picture disc installments, containing 2 tracks per vinyl. The artwork is a visual representation of both the recording process and the release with each 10 vinyl displaying the continent in which the tracks were recorded. The five vinyls when displayed on top of each other create the globe, unifying the concept as a whole with each vinyl existing as an art work and tribute to the continent it was recorded in. The band started the project in North America, building a studio during the label’s foundation in Brooklyn.
WATCH ‘ON MY WAY’ VIDEO
WATCH ‘CRAWL’ VIDEO
www.facebook.com/ISTROPICAL
www.twitter.com/istropical
www.istropical.com
www.instagram.com/istropicalofficial
www.soundcloud.com/istropical
www.youtube.com/IsTropicalVEVO