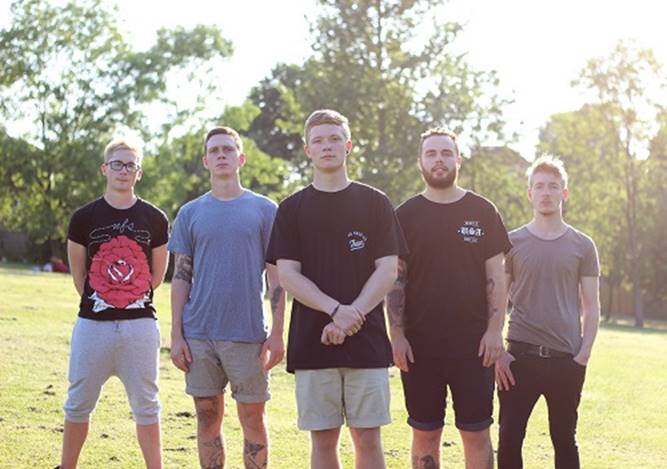 The track, taken from last year’s EP “Great Expectations” showcases Ghouls at their infectious and upbeat best, coupling pop-punk hooks with intricate brass injections. Having recently finished their European Tour with Riskee & The Ridicule, the quintet are looking forward to new music this Spring prior to a busy summer of touring and festivals.

London based pop-punkers Ghouls are stirring up the UK scene with their energetic and horn-fuelled tunes showcased with a stirring duo of impressive 2014 releases re-enforced by a captivating and raucous live show.

Formed in late 2011 by five friends intent on an exodus from various UK home towns, Ghouls convened in the nation’s capital and emerged into their current line-up in early 2013. Assimilating a range of sounds with the welcome inclusion of both a sax and trombone, the end product is not that of a band attempting to throw an excess of ingredients into the melting pot, but instead one conveying a chemistry, originality and charisma of the highest order.

A breakout 2014 saw the quintet release debut album Ten Thousand Words On as well as embarking on a 30 date UK and European Tour in Spring. The April 4th sell-out album release show at the Monarch in Camden was attended by a raft of fans, including Frank Turner, who continues to speak of his admiration for the promising young act.

A busy summer of festivals would soon follow, with Ghouls gracing the stages of Hit The Deck, Takedown, Boardmasters and Secret Garden Party. Not content with some of the nation’s leading festivals, the band also continued to garner support from some of music’s top names getting the nod from the likes of Professor Green and Slaves for support slots as the growing fan base and recognition surrounding the young Londoners shows no signs of slowing.

Having dropped EP “Great Expectations” in October followed by a short Winter tour with The JB Conspiracy, Ghouls are building a barrage of momentum catalysed only further by their ambition and hard-working attitude. 2015 is looking a very exciting prospect indeed with new music, European tour and a raft of other big plans in place for Ghouls to emerge as one of the most exciting new pop-punk acts in the UK.