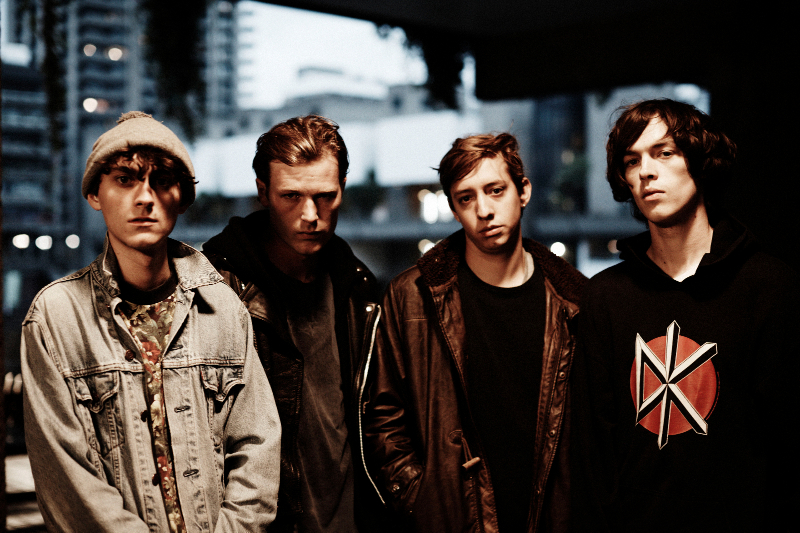 A different take on the hazy melodic guitar-pop of previous efforts, Haunter sees the band strip things back with particularly evocative effect as acoustic guitars replace electric and front man Felix Bushe’s vocal finds it’s most fragile point.
It follows an impressive start to the year from the London band that has seen them sell out debut headline shows in London and Manchester and find most recent single She’s A Witch playlisted on BBC Radio 1 and 6 Music. Next up is a trip to Austin, Texas for SXSW before they return to join Circa Waves on their UK tour and play with The Strokes at Hyde Park, British Summer Time Festival.

This compelling new single showcases what this promising act have to offer, hypnotic and delectable.


A breakthrough 2014 saw Gengahr establish themselves as one of the most exciting new groups around today with debut single ‘Powder’/’Bathed In Light’ earning support from the likes of Huw Stephens, NME, The Guardian and Blogotheque; whilst both tracks were playlisted at BBC 6Music and XFM, as well as hitting the blog-aggregating Hype Machine charts.
It was a year that also found the band taking on festival stages across the globe, with Glastonbury, Latitude and MIDI among those subject to their smoky and catchy performances. Subsequent tours with fellow underground heroes Wolf Alice and Superfood slotted perfectly alongside the larger stages they shared with Dry The River, Jungle and The Maccabees; sculpting their sound to a perfect point. And 2015 shows no sign of this slowing – after “queue round the block”‘ performances at Eurosonic, the band have just returned from supporting Alt-J at the O2 arena and their European tour. Next up is a trip to Austin, Texas for SXSW before they return to join Circa Waves on their UK tour and play with The Strokes at Hyde Park from British Summer Time.
While they bashfully describe their successes to dates as “happy accidents”, there’s clearly something greater at work behind Gengahr’s rise. A timelessness and effortless professionalism that has captured the hearts of all they’ve come into contact with – last year’s signing to indie super-label Transgressive and the upcoming release of their as-yet-untitled debut album in May are just the start. Comparisons to Radiohead are anything but reductive; there is sure to be a similarly twisting and enormous path ahead of this hypnotic North London quartet.