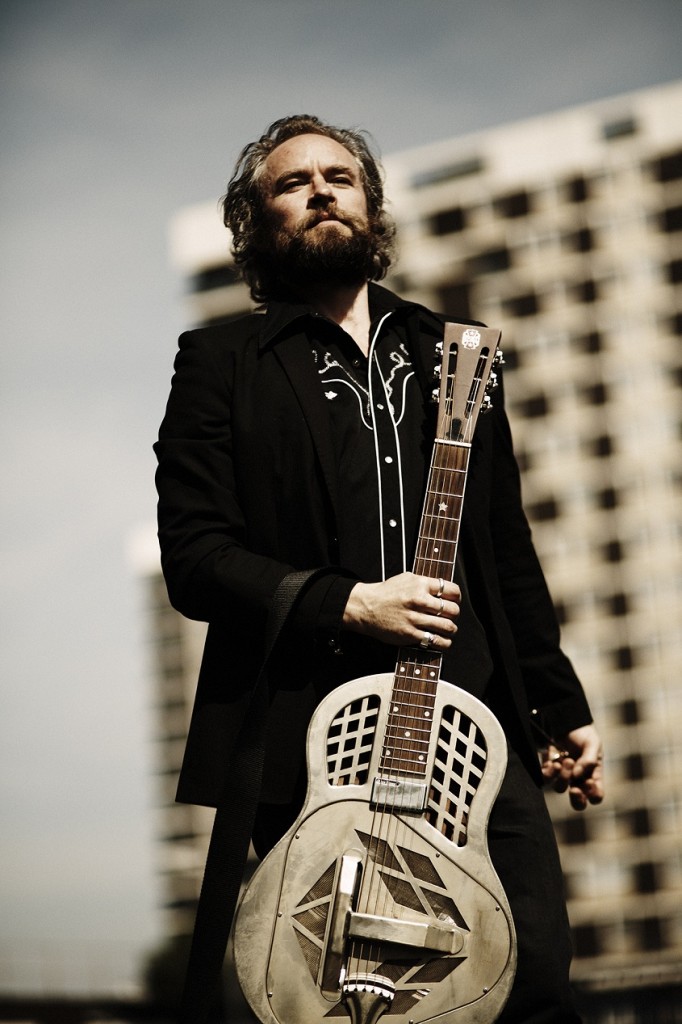 The cat is well and truly out of the bag on Duke Garwood and his soulful, stripped-bare sound, thanks to the recent release and acclaim for his fifth album Heavy Love, his first for Heavenly Recordings. Thrusting Garwood from south London’s unlikely bluesman into the spotlight he so thoroughly deserves, the word looks set to continue to spread with new single ‘Disco Lights’ and accompanying video directed by famous rock photographer and good friend Steve Gullick. There’s also a full UK tour this April and a new London show at the Southbank’s Purcell Room on 19th June. You’re going to be kicking yourself that he has been right under your noses all this time.

“‘Disco Lights was born in Stockholm on the road. The tale of deadly love at first sight. The night of the hunted.” Garwood is typically mystical about his latest cut, which features Petra Jean Phillipson on backing vocals, a stand out track from a album full of outstanding songs.

Recorded in Josh Homme’s Pink Duck studio in Los Angeles with Alain Johannes (QOTSA) and Mark Lanegan, Heavy Love is the sound of a genuine artist who has defined his 20 year plus career at his own pace and always on his own terms. The most focused distillation of the magic that’s made his bewitching story such a pleasure to trace; it’s dark, mystical, and erotic sound returns Garwood’s music to the elements, to his mad blues, the unhurried grooves and desert slithers, and his spectral, past-midnight burr that’s set to, at last, make him famous.
“I want to make music until my dying breath. I give it all. It is my blood,” he says. “I’m older, but I feel comfortable. It’s like I’ve found an extra gear in my body, in my mind, and I just went for it. I think that shows on Heavy Love.” Garwood will bring the magic alive with his blues-savaged-jazz flecked band on a UK April tour, with the London show already sold out, he’s announced another at the Purcell Room on June 19th.
April UK Tour:
07/04/15 Leeds – Wardrobe (tickets)
08/04/15 Glasgow – King Tuts (tickets)
10/04/15 Newcastle – Cluny 2 (tickets)
11/04/15 Manchester – Deaf Institute (tickets)
12/04/15 Nottingham – Bodega (tickets)
14/04/15 Southampton – Joiners (tickets)
15/04/15 Bristol – Louisiana (tickets)
16/04/15 London – St Pancras Old Church – SOLD OUT
June:
19/05/15 London – Purcell Rooms, Southbank Centre (tickets)
Summer Festivals:
June 5-7 – Red Rooster Festival
July 17-19 Latitude Festival
Sept 3-6 Festival No. 6
In addition to new single ‘Disco Lights’, Garwood will released a limited edition split 7″ with Mark Lanegan exclusively for Record Store Day featuring a cover of Bert Jansch’s ‘Fresh As A Sweet Sunday Morning’ on Heavenly Recordings.
Praise for Heavy Love:
“Career-defining album from grizzled country-blues Brit vagabond” – 4/5 MOJO
“Slow-burn songwriter’s moody breakthrough” – 8/10 Uncut Magazine
“Duke Garwood is a bluesman’s blueman.. impressively soulful” – 4/5 The Guardian
“there is a new and penetrating heat haze to these reverberating songs” The Observer
“Imagine the healing music that could be made if you mixed Mark Lanegan’s growling blues with JJ Cale’s hypnotic guitar shuffle. That’s what Garwood does” The Sunday Times
“Spacey experimental blues and woozy imaginings from singular and acclaimed underground maverick” Daily Mirror
“Heavy Love is soulful, eloquent and deeply affecting” – 4/5 The Skinny
“The smell of late nights creeping into dawn and a pace besides which a leisurely stroll looks like a sprint” Q