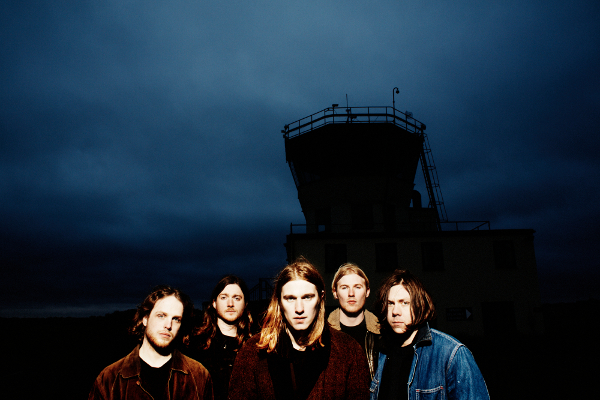 ‘Death Grip’ is a brand new song from space-rock  adventurers Broken Hands. An ambitious anthem, steeped in heavy fuzz and orbiting antics, ‘Death Grip’ can be streamed now via SoundCloud and is available as a free download via the band’s website now.

This is the first track from the Canterbury based five-piece to be released via SO Recordings. ‘Death Grip’ was produced by Tom Dalgety (Royal Blood, Band of Skulls, Turbowolf), who will be working on the band’s debut album, when they step in to the studio over the next few months.

Off the back of a period which saw the band support The Rolling Stones in Hyde Park, tour Europe with Band Of Skulls and complete a headline UK tour in their own right, vocalist Dale Norton felt the band weren’t pushing themselves toward their creative peak.

Following something of an epiphany, at Heathrow airport of all places, Norton realised everyone they knew was journeying elsewhere; friends were fleeing England for foreign climes, while other bedroom-dwelling associates were travelling inwards on voyages of narcotically-propelled self-discovery. “I was hearing the jet engines soaring into the sky from Heathrow’s runways,” says singer Norton. “They sounded just like fuzzed-out guitar feedback and festival sound drums crashing. Then came more images: planes taking off and people coming up. Turbulence and Paranoia. Engines charging and pupils dilating…”

Flight became the new goal, then – an obsession, a theme and a concept later dubbed the “Silver Landing Program”. “Although we had a growing fanbase I also knew none of us were totally happy with what we had been doing and there had been no direction there. But I also now knew what we needed to do,” Norton says. “The next week we were offered a house in which to live communally – and suddenly just as we were even considering if we should split, a whole new set of songs and ideas were created.”

The boys moved in, covered the whole house in silver foil and they were reborn. The resulting tracks formed the basis of a live show that has seen them already play in the USA for the first time, share stages with the likes of Black Sabbath, perform at Reading & Leeds and Sonisphere Festivals last summer and sell out several venues around the UK.

To coincide with the release of ‘Death Grip’, Broken Hands play a one-off London show at Electrowerkz on March 31. Tickets are available now. The band will be bringing their Silver Landing Program to the North London venue – a unique live experience that involves covering the entire venue is tin-foil – a show not to be missed.

‘Death Grip’ by Broken Hands is released April 6th via So Recordings but for a limited time is available for free download via www.brokenhands.co.uk

URKT Share “Muted” – The Final Of Their Triptych Of Tracks