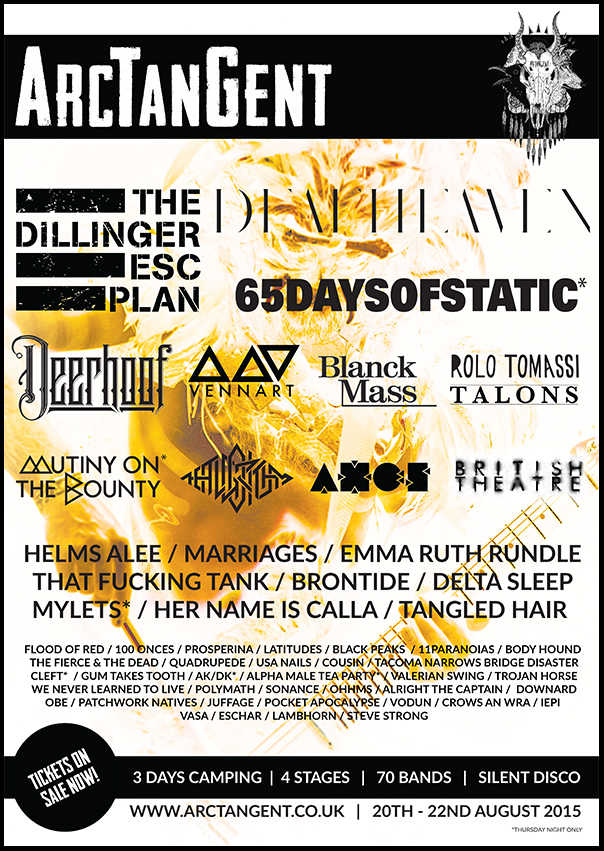 ArcTanGent has added Deerhoof, Blanck Mass, That Fucking Tank, Brontide, Mutiny On The Bounty, Delta Sleep, Axes, The Fierce & the Dead, Quadrupede, USA Nails and Cousin to their line up.

Organiser James Scarlett said “obviously we’re very happy about adding the amazing Deerhoof but what really pleases me about this announcement is the amazing UK post and math-rock bands. That Fucking Tank, Brontide, Delta Sleep, Axes. Need I say more?”

“We’ve still got around 10 bands to announce over the coming months and there are some absolutely amazing additions including our 2nd stage headliner for Thursday and Friday plus a couple more additions to the main stage. I can promise the ATG fans will be very happy, so watch this space!”

In addition, the ArcTanGent organisers have announced that there are 10 platinum tickets available to win. The platinum tickets are a VIP upgrade enabling the winners to have a glass of bubbly on arrival, backstage access including a brand new VIP bar, the chance to watch a band of their choice from the side of the stage, priority entrance with VIP camping and backstage toilets plus a merch bundle. To be in with a chance of winning, fans must simply buy their ticket before the 15th March and the winners will be drawn at random.

And for those who want to guarantee the VIP treatment, ArcTanGent have joined up with VIP Touring to offer 14 friends the chance to “live like rock stars” at the festival. Each person will be collected from their doorstep in a luxury air conditioned bus and driven to Fernhill Farm for three nights of living like Queens of the Stone Age (it used to be their bus). These fans will be able to sleep on the bus for the entire festival and enjoy on board comforts such as chilled drinks, mobile phone charging points, a cinema system, a fully loaded iPad and a Playstation4. After the festival, the bus will drop the VIP guests back at their doorsteps.

Tickets to purchase the VIP Tour Bus Package are on the ArcTanGent website.

Tickets are on sale now and can be purchased from www.arctangent.co.uk/tickets/

To enter the Platinum Ticket competition tickets must be purchased before the 15th March 2015.