NEW ALBUM “ONES AND ZEROS” 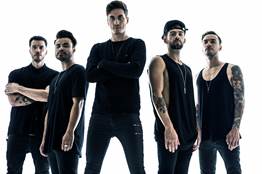 “We literally can’t wait to get back out on the road and play a load of new songs for you…”  GUSTAV WOOD, February 2015

Young Guns have today confirmed that they’ll be heading out on a headline tour in support of their forthcoming third album, Ones and Zeros.  The tour will kick off on Friday 27th March in Oxford, The full list of dates are as follows:

Tickets are priced at £12.50 regionally and £14 in London and will go on sale this Friday 20 February at 9am via www.seetickets.com or from the venues directly.

Young Guns highly anticipated third album, “Ones and Zeros” is now available to preorder via the following links:

This will be their first album released via new label, Virgin EMI.