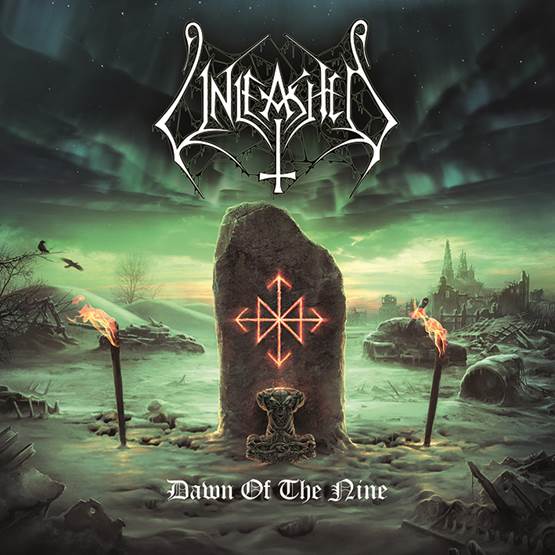 Warriors! Hear the sound of the battle cry! Legendary Swedish trailblazers UNLEASHED have forged a modern death metal weapon from the blood and spirit of their Viking ancestors for their twelfth studio album ‘Dawn Of The Nine’.

It was recorded by producer and guitar player Fredrik Folkare in his own Chrome Studios in Stockholm, Sweden. The artwork was created by Pär Olofsson (IMMORTAL, DEMONAZ, EXODUS).

‘Dawn Of The Nine’ will be released 27th April 2015 via Nuclear Blast.
Pre-orders are now available in the following formats:

“The artwork represents the continuation of our previous album, which ended with “The Great Battle of Odalheim”. The battle took place at Uppsala fields in Sweden, and you can clearly see the “kings graves” at the cover art work which is present at Uppsala also in the future. You can also see the bombed out Church in the far distance.

Then of course, you see the place of Blot in the front and the rune stone with the runic symbol of courage of the new dawn.”

Tracklisting for ‘Dawn Of The Nine’ reads as follows:

With their blend of melody and brutality, UNLEASHED are credited as the founders of the Viking death metal movement from their inception back in 1989.

Twenty six years later and their riffs are still pure shrapnel and their choruses just as epic – melting uncompromising brutality with anthemic odes to Odin.

Check out the latest lyric videos:

“Rise Of The Maya Warriors”

UNLEASHED will play Incineration Festival in Camden, London on 9th May. For tickets and more details visit incinerationfest.com