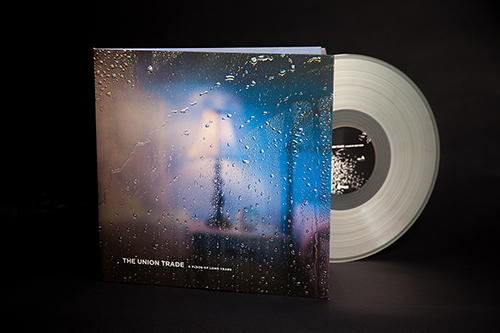 The Union Trade ‘A Place Of Long Years’
OUT TODAY!
After a nearly three year hiatus following the release of their last studio release, The Union Trade are back with new instrumental LP “A Place of Long Years”. Recorded at Different Fur in San Francisco, this special release features in-studio contributions from Tricycle Records label mates Nate Blaz on Cello (Geographer) and Ann Yu (Silver Swans) hauntingly spare vocals.

The Union Trade have made an instrumental statement that stakes out new ground for a band ready to re-emerge into the growing instrumental rock scene. Tricycle Records are thrilled to offer this release on limited edition smoky clear vinyl, CD and Digital format available at www.tricyclerecords.com. Also available on iTunes.

Buzz About The Record

The single, “Drakes Passage,” is a slow burn – a driving piece that builds upon steady anthemic jams, punctuated by a triumphant drumbeat. The single features Nate Blaz from Geographer on cello, which adds a lovely, solemn layer of melody to the song’s intricate structure.
– The Bay Bridged

Having skated on the edges of instrumental post-rock for nearly a decade, the band now goes “mostly unpeopled.”   The result is a triumphant new set.  Fans will still recognize the sweeping grandeur of the guitar-led soundscape, but the male voice has been replaced by Silver Swans’ Ann Yu, and is used only sparingly.
– A Closer Listen

On the one hand The Union Trade are a muscular (but not particularly heavy) post-rock group, on the other they can craft fatalistic shoegaze lullabies anchored by dreamy guitars…
– Foreign Accents

‘A Place of Long Years’, a cinematic post-rock album that explores the power of places physical and psychic and the awe of phenomena both mysterious and natural. With this inspiration The Union Trade have created a collection of diverse and moving soundscapes that remain mostly unpeopled, sometimes achingly so, while they abound with emotions intimate and epic.
– Arctic Drones

Not known for being a heavy post-rock group, we can expect to see further exploration within this album delving even deeper into the ambient/post-rock/shoegaze sound that these guys seems so attune to.
– Sly Vinyl

Somewhere in between post-rock, instrumental and Shoegaze, The Union Trade tackle their willful aspirations with an irrefutable distinction to make honest music.
– Interview with SF Station