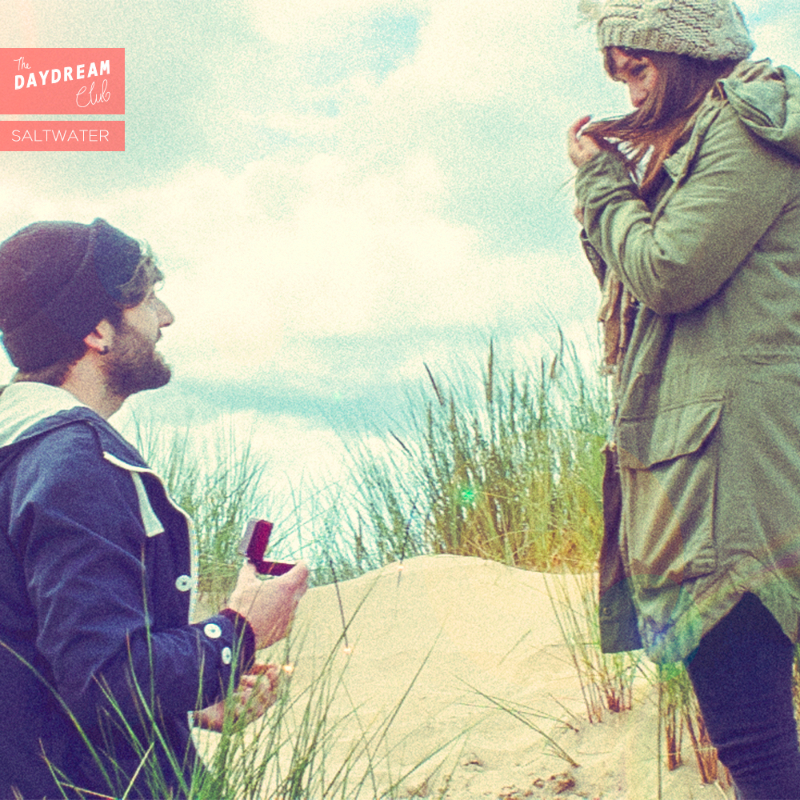 Will You Marry Me?!

The Daydream Club’s Adam Pickering surprised his musical soulmate Paula Walker by asking her to marry him during the video shoot for their new single ‘Saltwater’.

Adam explains… ”I’d been thinking ahead to the future and while filming the video for Saltwater I realised that I would probably never have a more perfect opportunity to do it.  Paula and I had our first official date at Formby Beach in Liverpool.  It’s an absolutely beautiful place, so I suggested it to Paula as a shoot location (secretly thinking that it’s the ideal place to pop the question).  I had the perfect musical backdrop, meaningful setting and even sparklers… After initial confusion from Paula, (she thought it was a strange scene that I hadn’t told her about), she eventually realised it was a genuine moment and thankfully said yes.”

The poignant video for ‘Saltwater’ produced by WeTheConspirators provides an enduring record of the proposal moment. ‘Saltwater’ is set for release on Monday 16th March, and is the first of three new singles with the plan to follow up with a deluxe album release.

‘Saltwater’ is their love song, Adam & Paula explain… “It’s about finding your soul-mate, the person you fit so perfectly with that you move together through life as one fluid entity.”

“You are salt and I the water, and now we are the ocean, we move in fluid motion”

Never content with just one version of their music the ‘Saltwater’ single is backed with a self-produced remix, which effortlessly re-imagines the track as the coolest of club tunes. It’s a dirty-phat-electronic-euphoric-fist-pump!  To coincide with the single launch The Daydream Club are set to embark on their biggest UK tour to date, with live dates across the country during March & April.  Check below for live shows or go to the website for full list.

In the last few years award winning alt-folk-pop duo The Daydream Club (Adam Pickering and Paula Walker) have enjoyed significant support from the BBC (TV and Radio), Rolling Stone, Burberry, Vogue and the Hype Machine’s most influential music blogs.  The Leicester based duo have an innate gift for captivating the audience with their onstage chemistry, personable charm and seamless girl/boy harmonies.  Tracks from their last release, double EP ‘Found’ and ‘Found (Remixed)’ amassed a staggering one million streams in just two weeks after they were added to a Spotify curated playlist, this led to their first BBC Radio 1 play via Huw Stephens.

The Daydream Club continue to enjoy significant support from Dean Jackson (BBC Nottingham) & Tom Robinson (BBC6 Music), their last single Soundwaves of Gold was played by every one of the BBC regional radio stations in addition to Amazing Radio.