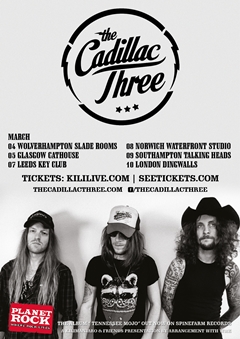 The Cadillac Three – described as “blending distorted lap-steel with Pantera riffs & outlaw song-writing” –  return to the UK for a 6 date headline tour in March.

The tour – the band’s first genuine headline run over here, following on from selected (sold-out) shows plus an appearance at Sonisphere 2014 – starts at the Slade Rooms in Wolverhampton on Wednesday, March 4th and culminates at Dingwalls in London on Tuesday, March 10th. An opening act will be confirmed shortly.

In addition, The Cadillac Three will be involved in the 57th US Grammy Awards, set to take place in Los Angeles next month (February 8th), with TC3 singer / guitarist Jaren Johnston having been nominated in 2 categories for production & song-writing.

The Grammy nominations led Jaren to exclaim, “What a great honour. I got urgent calls from my family just as soon as we landed in Europe before Christmas, and when that happens you’re always worried that bad news might be coming… I couldn’t have been more wrong! Good times!”

The Cadillac Three – Kelby Ray (lap steel / bass), Neil Mason (drums), plus Johnston – enjoyed a hugely busy and successful 2014 that saw the Nashville trio playing over 200 shows and visiting the UK & Europe on several occasions, most recently for three sold-out-in-advance UK dates last December; they also released their debut ‘Tennessee Mojo’ album via Spinefarm to great acclaim, and triumphed in the ‘Best New Band’ category at the Classic Rock Awards in Los Angeles.

Reflecting on the band’s fast-rising profile overseas, Neil says:- “We ended 2014 with some great shows in the UK, and we promised to keep coming back as long as y’all will have us… so we couldn’t be more excited to announce a new string of dates, some in familiar towns and some in places we’ve never been to! The UK has become like a second home to us over the past year or so, and we can’t wait to come back! We’ve been working hard on new music for y’all, too, and we’re looking forward to sharing some of it with you! See y’all soon!”

Tickets for the March tour go on general sale Thursday 10am, January 29th and are available from www.kililive.com and usual outlets.