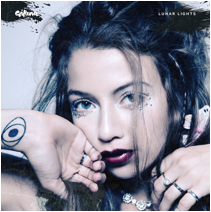 “Self-styled as “spiritual pop,” Sirena is most definitely one to look out for, and her playful but bold style is certainly refreshing.” – Indie Shuffle

“Sirena’s line of business is the kind of high quality pop music that has come sprouting out of Scandinavia lately.” – Ja Ja Ja Music

Thanks to the recent successes of Mapei, Seinabo Sey and Elliphant modern Sweden seems to be perfect breeding ground for high quality pop and talented singers. Another artist making such an upward crawl is Sirena, a 22-year-old Stockholm-Barcelona based singer and songwriter.  Beginning to write poetry and singing in different choirs at a young age, Sirena had a spiritual awakening, which pushed her to devote herself completely to her music.

After musical studies in Barcelona she returned to Sweden to concentrate on music for real. Meeting Noonie Bao at a party with mutual friends, in 2012, gave Sirena a new context, a team, and especially a new mentor who shared her views on music and creativity.  Sirena’s debut single Love Is Not was released in the summer of 2013. Since then she has been working on her own material, but also made a lot of collaborations. In 2014, she appeared as vocalist and songwriter on Style Of Eyes single Louder and with Alesso on Sweet Escape, which premiered at Ultra in Miami.

Sirena has gradually developed her own idiosyncratic style of epic, electronically tinged Scandi pop that lays some way between Tove Lo and Seinabo Sey.  In 2014 she released her critically acclaimed single Chemicals an alluring synth melody with the pop sensibility of MS MR and Sia, Chemicals gained Sirena enthusiastic support from The Line Of Best, Ja Ja Ja Music and Indie Shuffle.

Sirena now returns with her latest single Lunar Lights, which saw her work alongside producern Kretsen. The opening synths recede like ebbing waves alongside Sirena’s airy vocals all wrapped up in an enthralling melody.  Sirena is the perfect example of a pop act that shows pop can be progressive and experimental while losing none of its ability to be life affirming and breathlessly exciting. In a contemporary pop age of increasingly tired similarity, Sirena is a very welcome breath of fresh air.

Lunar Lights is available for sale and download everywhere NOW.

GET SOME MORE DICKwolf.