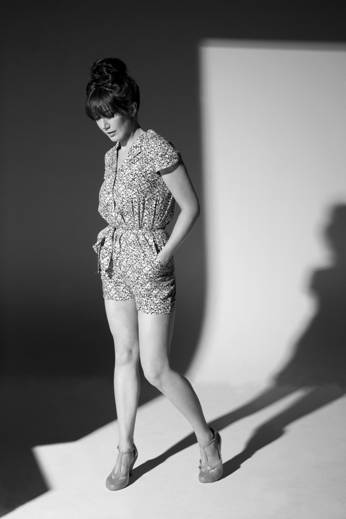 Out now on From Railings Records

Hailing from Manchester via the North East, Sara’s versatile musicianship transcends into a multi-layered production of brass and piano-laden pop and progressive influences. The classically led arrangements adorn her psychedelic and jazz infused rock where West Coast sounds are submerged in seventies prog and technicolour pop. Imagine Feist and Cate Le Bon with Stereolab’ssongbook.

The dramatic title track is a prelude of classical and folk inspired strings that escalates into a heavy rock crescendo. ‘I Find You’has a Twin Peaks style soundtrack and brimming with playful melodies the ode to ‘J.B Priestley’ possesses the spirit of Divine Comedy and Laetitia Sadier.

On this second album Sara is influenced by J.B Priestley. These graceful songs are deceptively deep and direct exploring observations on our perplexing relationships with time.

Recorded at home and at the band’s studio in Colne, Lancashire, the long-player was self-produced alongside her saxophonist Nicky Madden (The Earlies, I am Kloot). The album was mixed and mastered by Gareth Cousins an ex-Abbey Road Studios engineer whose credits include Roger Daltrey, Elvis Costello and The Stranglers.

She has previously released through Red Deer Club and taken her music on the road touring with both Tindersticks and Said The Whale along with a performance at Greenman Festival.

Sara is also writing new music for the University Of Manchester’s National Graphene Institute drawing on commonalties between creative processes with Women In Science Engineering and Technology (WISET). In June 2015 the piece will be performed with a band of Manchester based leading female musicians.