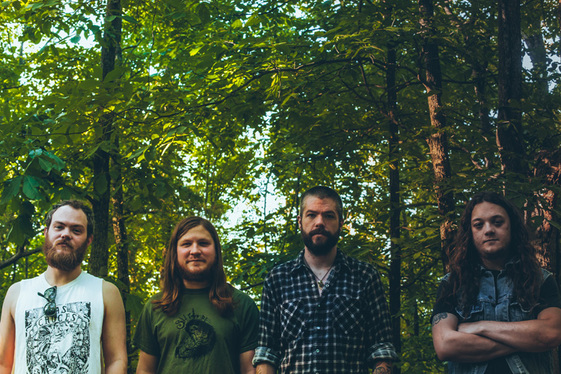 Musically, Foundations Of Burden saw the band strengthen their monolithic melodious structures of doom that have become synonymous with their signature sound – all while incorporating a much more progressive and musically challenging element to their anthems which compliment the huge epic melodies and harmonics even moreso. Where Sorrow and Extinction expanded the foundation which Pallbearer laid down with their demo, Foundations Of Burden morphs itself into a glorious new vision that is without doubt their most engaging work yet. The album was recorded and mixed by Billy Anderson (Neurosis, Sleep, Agalloch, The Melvins etc.) at Type Foundry Studios in Portland, OR. You can stream the album here.
PRAISE FOR FOUNDATIONS OF BURDEN
“Pallbearer have transcended the limitations of institution and produced what might be one of the finest doom releases of 2014.” – ROCK A ROLLA
“Forged in gloom with a skullcrushing bottom end yet paired with nonstop melody and guitarist/singer Brett Campbell’s mournful croon, it is refreshing for a metal band these days with a singer who can truly sing. Pallbearer employ lengthy songs that never bore and are constantly moving forward: be it mournful melodies or snaking leads, each song is its own epic pushing 10 minutes and bathed in a lush and full production.”  – ZERO TOLERANCE
“The album comes across as a sort of best of everything doom has to offer in 2014 – the introspective melancholy of 40 Watt Sun, the crushing, suicidal depression of Loss and the even rousing nature of the best remnants of traditional doom that still resist to this day, everything is here.” – TERRORIZER

“More than Sabbath acolytes, they wield a melodic grace rare in the genre, and an effortless ability to communicate a vision that’s both epic and accessible at the same time. And considering that Pallbearer deal mostly in 10-minute plus laments, this is perversely life-affirming stuff, translating misery into triumph once again.” – KERRANG!
“If they continue to write songs of this statue in the future then Pallbearer could well be doom metal’s light at the end of the tunnel.”  –
MUSIC OMH
“How does a band follow what has been hailed as a near masterpiece? The answer’s simple: they create a definitive masterpiece in Foundations Of Burden, a 55-minute opus that obliterates the competition and sets the standard in progressive doom for 2014…An impressive sophomore outing and essential listening from arguably the best in the genre, period. Like its predecessor, Foundations Of Burden should find itself in contention for (doom/metal) album of the year – at least this time we can say we saw it coming.” –
SLEEPING SHAMAN
“…rather than carry a casket loaded down with the fast-tiring tropes of the doom genre, with Foundations Of Burden Pallbearer choose to breathe thrilling new life into them.” – QUIETUS
www.profoundlorerecords.com
pallbearerdoom.com