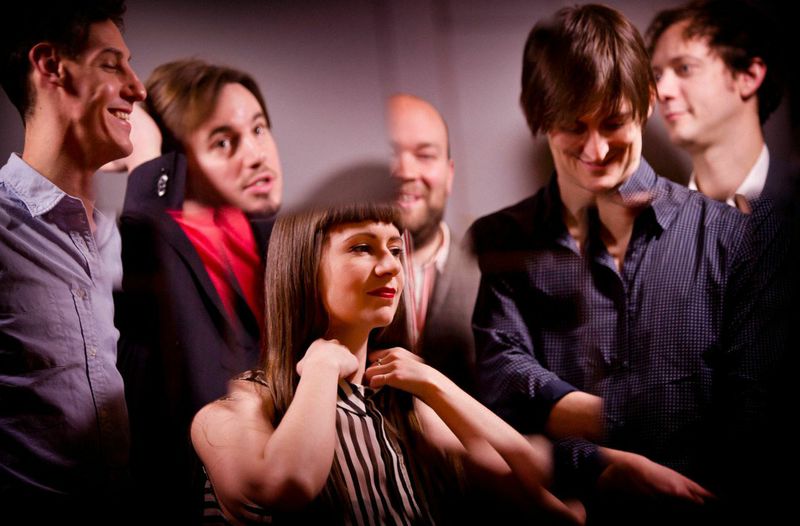 “I took a visit to Hastings and I noticed several Tall Black Cabins, which inspired the song of the same name. These structures are used by local fisherman for drying their nets.Theirs is a small and shrinking industry, but they have a passion for their trade and keep it going, even though it’s not always financially viable” – The Leisure Society on the premise behind the video.

“Nick Hemming is a musician of striking gifts” The Independent

On April 13th The Leisure Society release their fourth album The Fine Art of Hanging On, via Full Time Hobby. The intricate production, playing, arrangements, songwriting and broad-ranging instrumentation all indicate an outfit at their most purposeful and assured best.

Alongside an audible new creative peak tied together by a distinct theme, The Leisure Society’s acclaimed prior trademarks are still present – namely Nick Hemming’s intensely personal and honest lyrics which adorn the band’s warm, timeless, seamless blend of folk, grandiose pop and indie.

“‘The Fine Art of Hanging On’ is a recurrent, linking theme, although this wasn’t an intentional concept album”, explains Nick. “It’s about clinging to something – be that a relationship, a career, or life itself.

All the way through writing the album a friend of mine was battling cancer.  I reached out by sending him the rough demos of this album. By giving him this access to the work in progress and by him giving feedback, we formed a close bond. Sadly he lost his battle, but his input and presence is there in the album.”

The closing track ‘As The Shadows Form’ is a song explicitly about death – intentionally sequenced as a poignant and literal ending – “a full stop” – as Nick describes it.  Elsewhere, the ‘hanging on’ theme explores the plight of single boat fishermen.

“I took a visit to Hastings and I noticed several tall black cabins, which inspired the song of the same name. These structures are used by local fisherman for drying their nets.  Theirs is a small and shrinking industry, but they have a passion for their trade and keep it going, even though it’s not always financially viable.  We recorded the album onto analogue tape at Konk studios and mastered it at Abbey Road Studios. We wanted to make the best record we could, so despite the expense we crafted it in this way – not for money, but for the love of making it.”

Nick grew up in Burton-on-Trent. As a teenager he formed the indie band She Talks To Angels with his art college friend, director Shane Meadows plus the actor Paddy Considine. Following the band’s split, Nick was scooped up by local indie hopes The Telescopes, who were signed to Creation Records.

Shane Meadows remained a supporter, hiring Nick to score 1999’s A Room For Romeo Brass and 2004’s Dead Man’s Shoes, but Nick was losing his confidence. By the mid 2000s, he hadn’t sung in front of anyone for years.

Everything changed with the arrival of fellow Burton-on-Trent exile Christian Hardy, the outgoing yin to Nick’s shy, reserved yang. The Leisure Society was born and developed rapidly, with an initial landmark being the single ‘The Last Of The Melting Snow’, which was championed by Radcliffe and Maconie on Radio 2 and Elbow’s Guy Garvey on 6Music.

Within months of its release, Nick had been nominated for an Ivor Novello award, to rapturous media attention. The band’s world was to keep changing as the snowball kept rolling. The album Into The Murky Water was re-released on Full Time Hobby and became a slow-burn success story. Richard Thompson invited the band to play at his Meltdown Festival and there was another Ivor Novello nomination. They packed a tent at Glastonbury. Even Brian Eno declared himself a fan, as did Ray Davies, who booked the band to play at his Meltdown festival. They then provided the decisive musical ending to Paddy Considine’s BAFTA winning directorial debut Tyrannosaur.

With ‘The Fine Art of Hanging On’ the band have perhaps created their most cohesive body of work yet, and they have embraced the theme with original artwork once again provided by acclaimed young illustrator Owen Davey, a long-term Leisure Society collaborator.