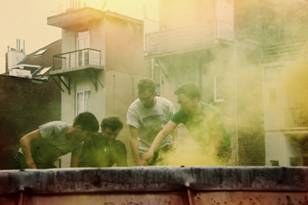 “Many Chances” channels alt-J at their most menacing, and Wild Beasts at their poppiest. It’s a beguiling blend of textures and harmonies from BRNS.’ The Line of Best Fit

Belgium-based band BRNS are proud to announce the U.K. release of their latest single, ‘Many Chances.’ The single’s release is set to accompany the U.K leg of their European tour, and is taken from their new sophomore album, ‘Patine’.

The tour will begin on February 17th at Glasgow’s Broadcast, followed by a show on the 18th at The Deaf Institute in Manchester. They will then play Birthdays in London on the 19th, before a performance at Brighton’s The Hope on February 20th. The band will conclude their string of UK dates at The Birdcage in Bristol, February 21st.

Having played over 200 shows in less than two years, BRNS have proven themselves as one of the most progressive and truly independent bands of this time. Playing across Europe with acts like Yeasayer, WHY?, Cloud Nothings and SUUNS, as well as performing at major European festivals such as Dour, Rock En Seine and Appletree Garden, the talented quartet have energized crowds everywhere with their sincere and exhilarating performances. NME cited them as one of the most exciting new bands of 2013, and their latest full length, ‘Patine’, promises to only confirm their hard work and dedication to expanding pop music.

Hailing from Brussels, BRNS members Tim “Clijsters” Philippe, Antoine Meersseman, Diego Leyder and César Laloux gain inspiration from various thriving music scenes scoping from the US to Europe. A four-piece of multi-instrumentalists who weave tunes that are all at once mystical, moody and infectious, their visceral sound will appeal to lovers of Animal Collective and Fugazi.

In addition to crafting a delicious cocktail of lulling vocals, instrumental layering, synths and percussion, BRNS’ accompanying music video for ‘Many Chances’ provokes thought and creative inspiration through its impressive animated visuals. As director Nicolas Fong describes, “The video attempts to echo that casualness, the constant internal struggle and vanity of a personal quest. It’s about fighting your inner dark demons.”

With their upcoming five-day U.K. tour now imminent, BRNS look set to impress with their unwavering ability to move from haunting ambience into chest-pounding beats and then back again.