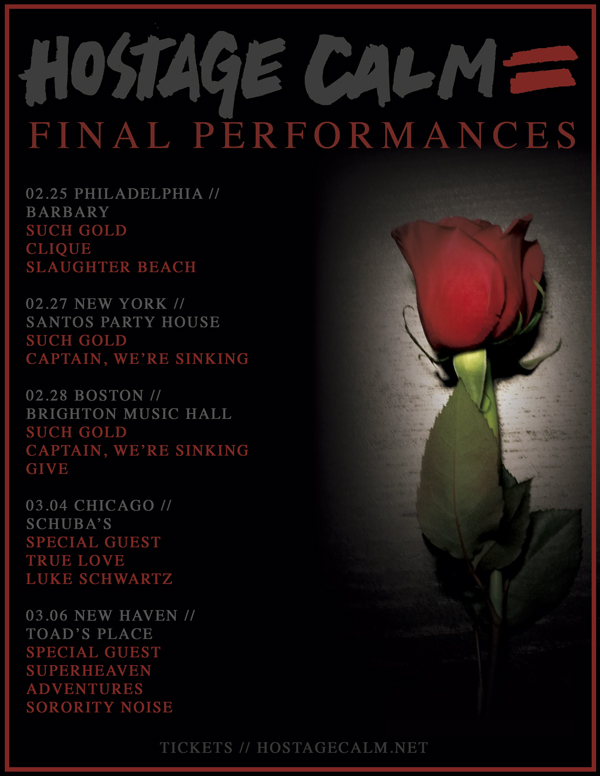 Hostage Calm have announced support for their final shows later this month.  The band broke up this fall after releasing four LPs and a slew of EPs and singles.  Their most recent full-length,Die On Stage, was released last September via Run For Cover.

—-
Politics and punk rock have always gone hand in hand, especially for Connecticut’s Hostage Calm. And while their sound may have shifted over the years from melodic hardcore to straight up power pop, their political message has only gotten stronger.  Hostage Calm first received national attention in 2010 with the release of their self-titled debut, using this success as a way to draw fans’ attention to the importance of LGBT equality. Through offering free downloads of the record to encourage the signing of an online petition to senators opposing marriage equality, playing numerous benefits, and distributing their now iconic “I Support Same-Sex Marriage” shirt, Hostage Calm demonstrated a commitment to their political beliefs that has become all too rare in punk rock today.

With their 2012 critically acclaimed record Please Remain Calm, the members of Hostage Calm continued to demonstrate their commitment to political punk.  Hailed as “the punk album of the Great Recession,” Please Remain Calm tackled the grim realities of the recessions’ effects on the younger generation head-on.  This time around, Die On Stage celebrates the post-millennial fatalism in today’s youth culture, creating a message seldom found in pop-punk. The politically charged band continues to offer a genuine view of American culture through critical eyes.