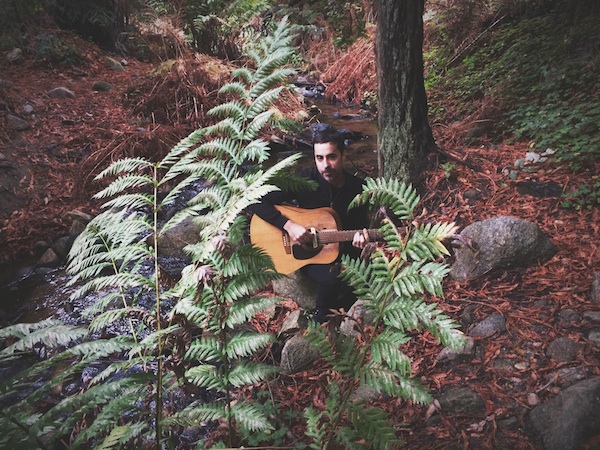 “The songwriting is very strong, cinematic even. Rey has a knack for mise-en-scène – one that’s romantic and shot like a French New Wave film.” –YVYNYL

A lone wolf & California native, Rey Villalobos records under the name ‘House of Wolves’, the literal translation of his family name. The last few years Villalobos has spent much of his time touring Europe with the release of his debut album Fold In The Wind on French label Fargo Records (Two Gallants, Alela Diane, Andrew Bird, Ryan Adams). Bells and chimes drip from corners, piano keys build from below, guitar lines swell and string arrangements dance about. And on top of it all, Villalobos’ haunting voice hazily rests.

This spring House of Wolves returns with a new LP ‘Daughter of The Sea’, an 8 song solo record of hauntingly intimate unreserved songs. Produced and mixed by Darragh Nolan (Asta Kalapa) at his studio on the east coast of Ireland, the album is densely overcast with warm, lo-fi acoustic guitar, vintage grand piano, laid-back drums & mellotrons dusted throughout.

Dealing with themes of fantasy and desire, but none as overwhelming as the yearning for the pure solitude found in nature, House of Wolves filters the sharp experiences of modern living through dreamy soft-focus recollections based in compassion, vitality and wanderlust.
Falling in love with Chopin nocturnes was Villalobos’ first musical love. Villalobos began studying classical piano as a kid, but now composes most of his music on the acoustic guitar: “the guitar for me is more intuitive, all I see is a piece of wood with marks, whereas the piano is far more familiar… knowing where each note is gets in the way of writing instinctively.”  House of Wolves music is delicately accompanied by a single voice with a unique sense of rhythm, a love of melancholic melodies, and a craving for chord progressions.

The opening track on ‘Daughter of The Sea’, “Beautiful Things”, sets the stage with muted lights of a dusty morning suddenly clear, and a signature rhythm cracks through, braced by Villalobos’ signature voice. Elsewhere, ‘Take Me To The Others’ transports the listener on a journey through distant memories wrought with both intense joy and peripheral sadness. Always sustained with Villalobos’ subtle and reflective vocals, ‘Daughter of The Sea’ is imbued with a sense of delicacy and complemented by layers of production that effortlessly hang in the air like a light morning mist, designed to lift us from weighty matters in beautiful ways.