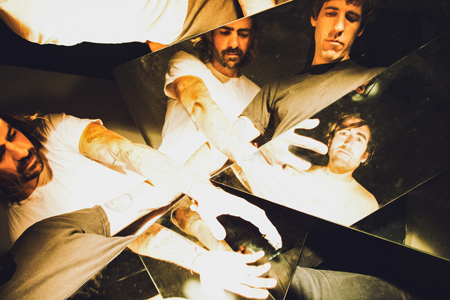 “Another giant step forwards in A Place To Bury Strangers’ continual evolution” – Drowned in Sound
“some of the most inventive and intelligent noise rock since the turn of the century… the group’s most complete effort to date” – The Line of Best Fit
“Transfixiation pulls absolutely no punches. It’s the sound of a band completely untethered and unrefined, delivering what their live pedigree promises.” – Artrocker
A Place To Bury Strangers’ new album, Transfixiation, is finally out now on Dead Oceans after streaming in full all of last week via The Quietus.
Having previously shared “We’ve Come So Far,” one of the many standout tracks on Transfixiation, the band is following it up with an official video directed by Matt Conboy. Also a former Death By Audio resident like frontman Oliver Ackermann, Conboy wanted to make a video that gave the viewer the visceral experience of seeing the band. Conboy says, “The fact that we were loosing our home [Death By Audio], that it was the last show and APTBS were playing seemed like too good of an opportunity to turn down. We filmed their set and I felt like we were able to capture the spirit of that moment: this weird, dark form of celebration and catharsis. By the end of the night I think everybody felt like they really got something out of their system.”
The video offers an exciting glimpse into A Place To Bury Strangers’ pummeling live show, which they’ll bring on the road to the UK starting in march. A full list of tour dates is below.
A PLACE TO BURY STRANGERS UK/IRELAND TOUR DATES – TICKETS HERE