The Lovely Eggs return with new album and two tours!‏ 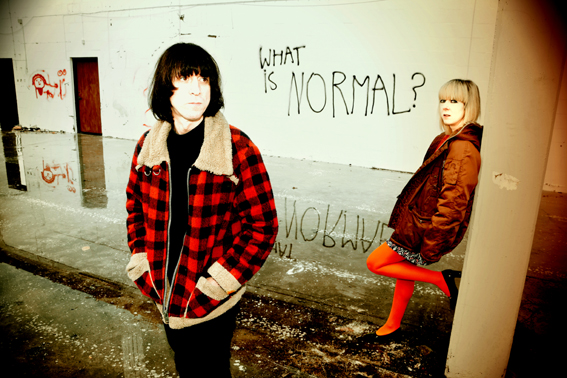 Surrealists of the Great British Underground scene The Lovely Eggs return in 2015 with a new single, album and two UK tours.

The oddball D.I.Y punk rock pair, The Lovely Eggs, have been selling out venues across the country without the help of management, booking agent or record label support. And true to form they return with their fourth self-produced and self-recorded album, This is Our Nowhere, a title which sums up their celebration and love of a scene which doesn’t exist in the eyes of the manufactured mainstream.The Lovely Eggs have been relative outsiders to the music industry since 2006 with their unrelenting touring, single and album releases. But their “fuck it” attitude and DIY punk rock spirit has won the hearts of many fans, gaining them an increasingly loyal live following as well as huge support from DJs at BBC 6 Music, Radio One and XFM where they have recorded sessions for all three stations.

This Is Our Nowhere (recorded at a disused factory in their home town of Lancaster) cements their reputation as one of the most exciting, innovative and genuine bands on the Great British Underground scene.

With songs firmly set in the hum drum of everyday life, The Lovely Eggs turn normality on its head, squeezing it through their peculiar surreal mincing machine and blending it with fuzzed out guitar and crashing drums.  For Holly and David being in a band is a way of life. And they approach it in a unique way laughing in the face of life’s absurdities. They are a rallying point for anyone that sees life for what it is.  A mess. A wonderful, car crash of experiences, greeting each new chance with a cheeky grin, a sneer and a big fuck you to the pricks.

Released on the band’s own label Egg Records on May 4th (with a special  black and white coloured vinyl limited edition release for Record Store Day on April 18th) This Is Our Nowhere  brings an essential addition to an already impressive discography, with lead single ‘Magic Onion’ providing a raucous punked up psyche trip of nonsensical perfection.

The band will head out on a 10 date UK tour on March 19th before embarking on another set of UK dates at the start of May.

Cut Copy return with first single & video in three years; “Love Is All We Share” out now