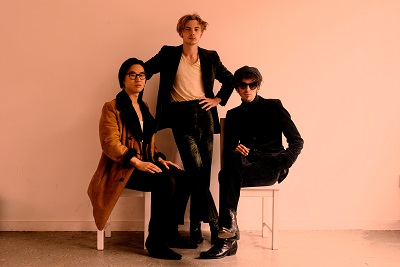 Both warmly familiar and a breath of fresh air, ‘Ads’ earned South London trio MOVIE comparisons with the post-punk precision of Orange Juice, the urbane lyricism of Blur, or the glory days, noughties-Indie of Mystery Jets. The cowbell clatter of new single ‘In Vain’ twists an otherwise bleak image of unconditional love via a similarly floor-filling groove, with the video directed by the band themselves from the disused Tooting pub in which they live. Describing the clip, they write “the song is about futility – sexual, motivational and ultimately religious. We had a pretty strong sense of what the video should look like – such as the colours and not taking ourselves too seriously – and made it in a day in the living area of our pub. We wanted it to be aesthetically striking and funny, like many of the best things in life.”

MOVIE are Theo Spark (vocals/guitar), Jamie Stiby Harris (vocals/keys/guitar) and Ollie Tobin (bass): fresh from University and Art School, but friends since the age of 10. Lyrically, it’s often self-deprecating but cocksure, by way of catharsis: elsewhere on their new EP, the muscular title track, ‘Tusk Vegas’, examines the emptiness of erotic fantasy, and the merging of pornographic voyeurism with real-life relationships. The heady psychedelia of ‘In A Life’, meanwhile, reworks a demo Jamie’s dad recorded in the mid-60s, but had left lying around on a tape reel all these years. And closer ‘Misty Windowpane’ mutates a love of classic girl-groups via disco, its spiralling organ and crashing outro capturing MOVIE’s overarching pick-and-mix approach to the great British pop acts through the last few decades. The results are infectious, contemporary and just as tongue in cheek as they are quietly, acutely observed: after the lights come up, this is a MOVIE you can believe in.