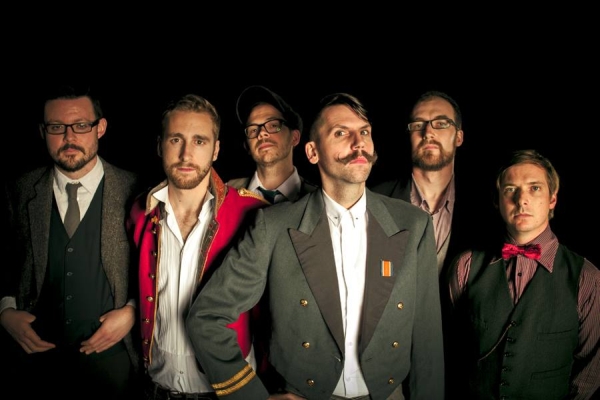 “Quiet Quiet Band reward you with one hand while making a stabby-stabby motion with the other” Ben Marwood, Xtra Mile Recordings

Luring the listener with its multi-part vocal rounds and sinuous strings atop assertive strummings and a pummelling beat, ‘Battery Human’ is a cautionary tale of extra-terrestrial visitors who have unclear motives and advanced social ethics. The lyrical promise, or is it a threat, “I’m Coming To Your Planet/I’m Coming With Gifts”, is set to a meandering, indelible melody, and the song’s unplugged and earthily energetic treatment of interstellar concerns comes on like the Levellers taking a residency on the Death Star, or Woody Guthrie being cast as The Man Who Fell to Earth. ‘Battery Human’ is accompanied by a stylish promo video that captures the dynamic feel of the band’s live performances.

Telling tales of love, death and terrible beings from beneath the sea, Quiet Quiet Band are the rotting fruits in nu-folk’s verdant pastures. Extrovert practitioners of hillbilly hoedowns, sociopathic shanties and warped waltzes, QQB’s macabre alternative ditties are further animated by a vociferous lyrical delivery, drawing comparisons with such rootsy luminaries as Violent Femmes, Nick Cave and Johnny Cash. “Our songs often evoke fictional characters who are reflecting on their own flaws, regrets, losses and mistakes,” says lead vocalist Tom Purcell, “even if they happen to be lunatics with bags of poisoned sweets!” Also comprising Paul Smith (guitar/vocals), Jay Newton (guitar), Scott Painter (bass), Jon Hare-Winton (drums) and Devon Gillespie (viola), QQB are renowned for their blistering live sets, the ferocity of which has now been captured in the studio, ready to be unleashed on an unsuspecting public in 2015. Brace yourselves…