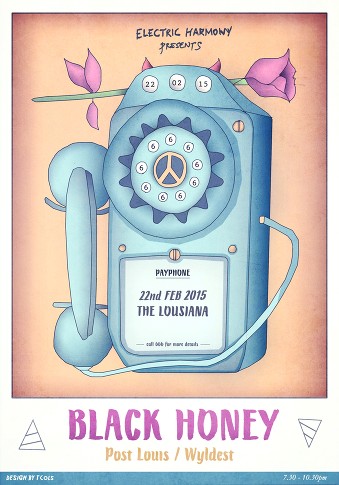 The Louisiana, Bristol on 22nd February 2015

Electric Harmony proudly present the second showcase event at The Louisiana, Bristol. A must see event!

On February 22nd, Electric Harmony are joined by Black Honey + Post Louis + Wyldest. With this huge line up out of the bag the promotions company have released a limited wave of super early bird tickets for just £4! Save this February date for one hell of a night.

Black Honey are fast becoming one of the most talked about guitar bands. Starting out shrouded in mystery the band let the music do the talking, there were no photos, only their TV themed artwork to accompany each track they released. Further adding to the intrigue, instead of issuing a standard press release the band invited fans to text them directly if they wanted to find out more.

After dreamy opener ‘Sleep Forever’, 60’s psychedelic ‘Teenager’ and grunge rock ‘The Taste’ the band revealed their debut EP with their final hook laden track ‘Bloodlust’ and the first photo of themselves. To

celebrate the band played a packed out secret show in their hometown of Brighton. Initially only being known as ’the sweet taste of darkness’ Black Honey have gone on to become an unstoppable force and one of the most exciting bands of the year.

After their first EP This Could Be a Bridge, which caught the attention of tastemakers such as Pitchfork, Rolling Stone, Dummy and The Line Of Best Fit, Post Louis are now back with Uptight EP.

The EP was recorded and produced by Robbie and Stephanie at home, just like the last one. Uptight aims to exploit and explore the tension between the power of playing in a big live band and the intimacy of home recording. Robbie recorded almost all of the instruments trying to imagine/emulate the sound of the six piece group.

This is a confident, coherent release; lyrically, in the first EP, vulnerability was in the foreground. Now that vulnerability is tempered with a stronger sense of self-possession. There is even some righteous anger and mockery directed towards the imagined characters

The four original tracks, while different in mood, share refined production and sensitive musical storytelling. The rhythm of the lead track ‘Fragility’ grabs you from the start: interlocked layers and bright vocals that gradually coalesce as the song builds. ‘Faculty’ is a beautifully crafted song, showing Robbie’s ability to craft a stunning mystical soundscape.

‘Uptight’ is Post Louis at their finest, offering a subtle interplay between vocal melodies and an instrumental that takes unexpected directions. Closing the EP is the melancholic ‘Book Your Skin’ described by Interview Magazine as “darkly beautiful, if a little unsettling”.

‘Post Louis have succeeded in creating a thrilling revivalism of their own’. **** This Is Fake DIY

‘Post Louis’ latest single, “This Could Be a Bridge”, is a slack rock epic, building to buzzy crescendos with rubbery riffs (…) melodramatic lyrics, and quick flashes of guitar god soloing from Stern.’ Pitchfork

North London duo Wyldest – Zoe Mead and Holly Mullineaux – have only been writing and performing their brand of lo-fi-nodding dream pop since the summer but have already enjoyed early support from the likes of Radio One’s Huw Stephens and The Line Of Best Fit.

The quality of their two self-produced tracks also alerted the attention of Green Man, with the band opening the Welsh festival in the summer, and DIY Magazine, who booked them as part of their all-dayer, alongside the likes of fellow up-and-comers Palace, Blessa and Flyte. Expect to see a lot more of Wyldest as 2015 develops.
Those amazing guys in Electric Harmony have put together a playlist to lure you to the evening-