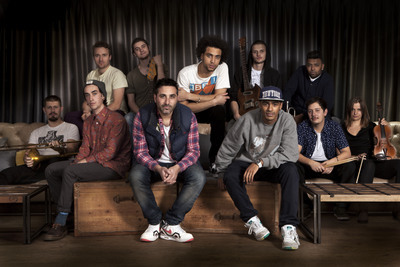 DJ Yoda has announced details for his new album, Breakfast Of Champions, released on March 9 2015 through Kartel/Believe Digital. Curated and produced by DJ Yoda, the album features an eleven-strong collective of UK MCs and musicians, including Rex Domino and Mouse Outfit members Sparkz & Truthos Mufasa. The record will be trailed by a new single ‘The Baddest’ (now streaming here) due out on March 16, ahead of an audio-visual headline tour through March, kicking off at Manchester’s Band On The Wall on March 13 and including London’s The Forum on March 14.

Duncan Beiny, aka DJ Yoda, is no ordinary scratch DJ – and fittingly, this year’s realisation of his Breakfast of Champions project is far from being a predictable move. Energised by the wealth of starry collaborators (including Action Bronson, Boy George & Roots Manuva) for his acclaimed second artist album, 2012’s Chop Suey, Yoda elected for his next project to look in the opposite direction – towards upcoming artists of the UK scene, assembling the Breakfast of Champions cast from a Who’s Who of hip-hop’s next wave.

The genesis of this collective spans back to a residency slot offered to Yoda by Manchester’s Band on The Wall venue, an invitation which manifested itself in an open call from the DJ to emerging MCs, musicians and animators to join a live band personally curated by Yoda. Several hundred meticulously vetted YouTube submissions later, Yoda’s line-up was completed, with the group appearing at Band on The Wall for a live debut which sold out upfront, minus any promotional muscle. It was a trick the band later replicated in London when their Jazz Café headline likewise sold-out nigh on a month upfront.

Always breaking new ground, Yoda made history last year with the first ever audio-visual mix for BBC Radio 6 Music – making waves around the globe, it secured him both a Sony Radio Academy Award nomination & a 6 Mix residency which has seen him become part of 6Music’s distinguished DJ team alongside Andrew Weatherall and Erol Alkan. Alloying hands-in-the-air clubbing with a night at the movies, Yoda’s AV shows cut the best movie & YouTube moments with 80’s electro and contemporary hip-hop.  One of the first DJs to turn his hand to re-scoring classic films with the now-cult DJ Yoda Goes to the Movies series, he was this year commissioned by the BFI to reprise his trailblazing ways as part of the BFI’s Sonic Cinema event with DJ Yoda Goes to the Sci-Fi Movies.

Album available for pre-order on:

13 March MANCHESTER Band on The Wall

THE COATHANGERS announce UK tour next month- Album ‘The Devil You Know’ out TODAY on Suicide Squeeze!