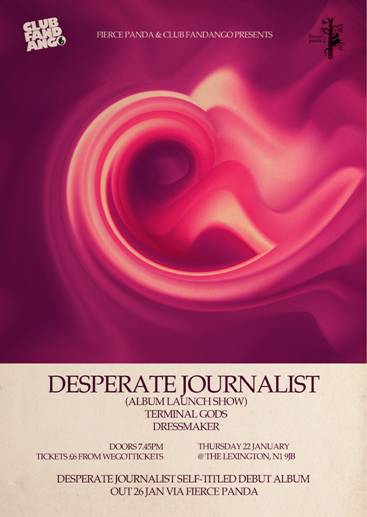 WITH SUPPORT FROM TERMINAL GODS & DRESSMAKER

Desperate Journalist consist of two girls and two boys who have bonded in the abandoned wilds of North London. Jo Bevan (vocals), Simon Drowner (bass), Rob Hardy (guitar) and Caz Hellbent (drums) – for ’tis they – have been hauled together by a fearsome instinct for what makes alternative music actually really properly authentically alternative.

They started their journey at the local Negative Creep grunge club night in Finsbury Park on February 23rd 2013. Since those heady, dark days Desperate Journalist have released one EP and two heroically independent singles and played every other shadowy basement in London Town, displaying a bold musical vigour and an admirably chaotic sense of coherence along the way.

Now comes the heroically independent self-titled debut album ‘Desperate Journalist’, which was recorded almost entirely live in Soho’s Dean Street Studios, jointly produced alongside Keith TOTP and mixed by the band itself. If that wasn’t organic enough, Desperate Journalist designed their own artwork, get heavily involved in their videos and generally hark back to a time when an authentic DIY spirit pervaded, like a perfect indie rock storm brewing on the horizon.

Strung out together the eleven album tracks prove that there is something terrifically passionate and uncontrived about Desperate Journalist: as previous singles ‘Cristina’, ‘Organ’ and ‘Happening’ suggested there is towering, glowering joy to be found in the combination of Rob Hardy’s 12-string guitar sparklings and Jo Bevan’s strident vocals, and they revealed a leftfield band not afraid of giving their punchy blend of melody and melodrama a great big, gothic grapple.

This much is true: you may well have observed that all the ‘Desperate Journalist’ songs have one word – and in the extremely minimal case of ‘O’, one letter – titles. It matches the compositions themselves, which are snappy and direct. And these are the kinds of things which set Desperate Journalist apart from the maddening masses, because this music is made by people who intelligently channel the essence of their influences rather than simply wear their t-shirts.

DOWN Returns With New EP To Release September 18th