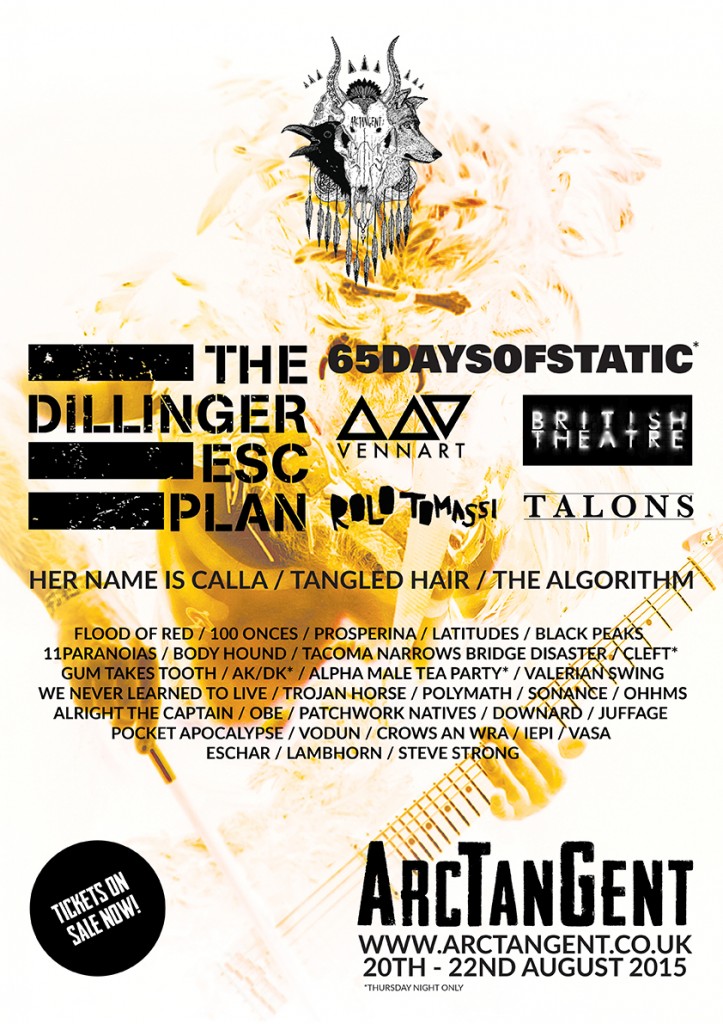 ARCTANGENT FESTIVAL’S BIGGEST LINE UP ANNOUNCEMENT YET – INCLUDING HEADLINERS THE DILLINGER ESCAPE PLAN AND 65DAYSOFSTATIC.

ArcTanGent launches tickets along with the announcement of 40 bands.

The Dillinger Escape Plan are announced as main stage headliners with 65daysofstatic topping the Thursday night bill. Other bands announced include Vennart, Talons, Her Name Is Calla, British Theatre, The Algorithm, Rolo Tomassi and Tangled Hair.

Organiser James Scarlett said “this year we were keen to come back bigger and better than ever and I think announcing the likes of The Dillinger Escape Plan and 65daysofstatic is a big statement of intent. We’re really close to confirming the other headliners and should have news on that very soon, along with some other amazing bands that are often requested by our fans.

Former Oceansize leader and current Biffy Clyro touring guitarist Mike Vernnart says “I’m delighted to announce I’ll be playing two sets at ArcTanGent Festival this August – one with British Theatre and the other with my new band Vennart. Anyone familiar with my past will recognise some familiar faces – and maybe even the odd tune. I’ll be bringing the marvelous Steve Durose and, of course, the effervescent Gambler along for the ride. The people at ArcTanGent have invited us every year to perform and I’m happy to finally be in a position to say yes. We’re gonna make a weekend of it, hang out, have a bevvy and watch some weird bands. See ya there!”

To attend the “super-fans” Thursday night of ArcTanGent a three-day festival ticket is required. The Thursday line up includes sets from 65daysofstatic, Cleft, Alpha Male Tea Party and AK/DK. These bands will not be appearing elsewhere during the weekend.

Organiser Goc O’Callaghan says “we wanted to bring back some of the bands that helped make last year’s ArcTanGent such a success. The VIP Early Entry is an optional night, so it’s really targeted at the super-fans. Bringing back some special guests will excite those who came to the festival in the last two years, and will give new fans a chance to catch a little bit of what they’ve been missing out on.

Tickets go on sale today (31st January) and can be purchased from www.arctangent.co.uk/tickets/

Tickets are strictly limited in number and are expected to sell out well before the event.