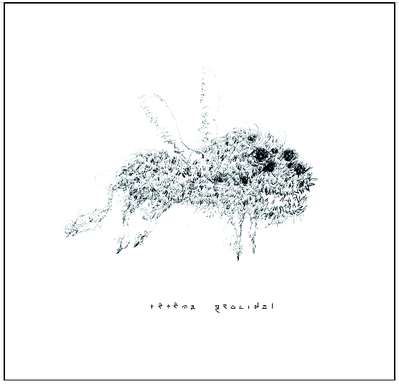 The clip, directed by Sabina Maselli, was shot on digital, transferred to 16mm film and then transferred back again to digital. Pateras described the technique as “how Beckett used to write between French and English. He’d write something in English, translate it to French, and then back to English (often repeating this process until he was happy how it read/sounded in both). Through this he kept the artefacts of translation intact and so both linguistic logics evolve into something unheard. This very much reflects how the record straddles digital and analogue realms and different historical periods of orchestration. For example, the composition of the songs involved the orchestration of digital elements with strings, or winds were ornamented with analogue synths. In some cases Mike and I translated his rough miasmic vocal takes into lyrics, maintaining their rhythmic and melodic contour whilst transforming them into something completely different. Thus Sabina’s techniques are perfect to visually represent what we do”.

The Quietus, who previously premiered audio for the track, commented…”Judging from ‘Tenz’…the album promises to be an intriguing affair. It opens with the lumbering rhythmical heft that immediately brings to mind Cut Hands, before Patton’s incantatory vocals surface and we skirt through jazzy touches and gentle inflections of contrabass recorder and synth, culminating in a full-on, howled assault.“
Pateras is an Australian composer/pianist who has released eighteen albums over the last decade under a variety of monikers including Thymolphthalein and Pivixki, a pair of albums (Chromatophore and Mutant Theatre) under his own name, which were released by Tzadik and a 5-CD box set detailing his work for keyboards, orchestra and percussion. Tiny Mix Tapes said Pateras’ music offers a look as to where “trailblazers of avant-garde are heading,” adding music lovers will “be captivated by his bold creative foray.”
GEOCIDAL TRACK LIST:
1. INVOCATION OF THE SWARM (2:44)
2. PURE WAR (2:41)
3. IRUNDI (4:18)
4. THE HELL OF NOW (3:15)
5. TEN YEARS TRICKED (7:31)
6. 3-2-1 CIVILIZATION (3:36)
7. TENZ (3:23)
8. SUISHAMAN (0:34)
9. KID HAS GOT THE BOMB (4:31)
10. EMPTINESS OF ECSTACY (2:10)
11. DEATH IN TANGIERS (4:01)
www.anthonypateras.com
www.ipecac.com