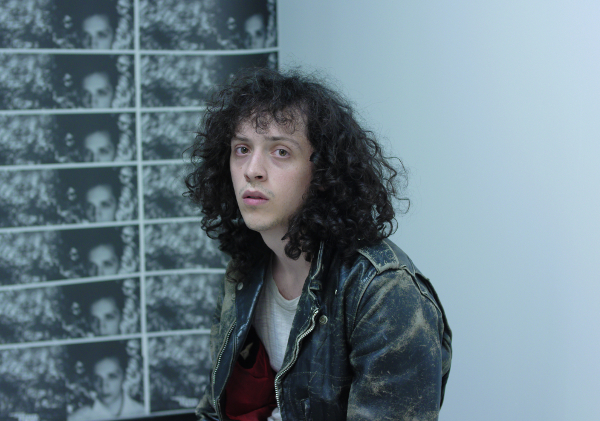 Watch new video for ‘Hover On A Silver’

Album A Hound At The Hem out now (DFA Records)

Slim Twig’s excellent debut for DFA Records, A Hound At The Hem, continues to win over fans and critics alike. It’s a fantastically weird and engaging album. Today he premieres the ‘Hover On A Sliver’ video, the latest in a series of creepy and stunning visual accompaniments.

The video was created by 3 Blondes and a Camera, the production team of Jennifer Hazel, LuLu Turnbull and Meg Remy (of US Girls), and is a reflection of a tight knit, art-oriented family dynamic between the three. Lulu can be found as a performer in many of Meg’s videos and short pieces, while Jennifer has contributed to some of these works as well.

Slim Twig will tour with US Girls next year in support of A Hound At The Hem before plotting his first shows in the UK and Europe.

“there are some sensational moments here, including ‘Heavy Splendour’, a baroque epic that comes on like Liars tackling The Beach Boys’ ‘Smile’, and ‘All This Wanting’, which could be Kelley Stoltz produced by The Fiery Furnaces. If ‘A Hound At The Hem’ isn’t quite a masterpiece, it at least suggests Slim Twig might just have one in him.” – NME

“How does one describe music so off-kilter and alluring that it was once written off by a world too stupid to know better—but later discovered by the aesthetes at DFA, Slim Twig? If Scott Walker had gotten as weird as Climate of Hunter—and no weirder—and was still making cracking tunes that Marc Almond could fully get behind, he would be Slim Twig. No, wait; if Bryan Ferry had just gotten stranger instead of retreating into standards, he would be Slim Twig. No, hold on, I’ve got it: if this world was better and the term ‘art-pop’ hadn’t been utterly diminished by late capitalism pouring liquid boring on top of beats, Slim Twig would be the king…or at least the prince in the shadows, plotting.” – Noisey

“. . . a wholly satisfactory solution for those [Scott] Walker fans who find themselves torn between the full-bodied melodrama of his earliest solo work and the often impenetrable soundscapes of the post-Climate Of Hunter years. It’s this balance of accessibility and experimentation that makes Hound – and indeed Twig himself – such an intriguing prospect. For every chunk of Zombies-esque pop-psych riffage, there’s a muffled hip-hop beat buried deep in the mix; for every elegant orchestral flourish, there’s a vocal that sounds like it’s been dubbed in Lee Perry’s echo chamber.” – The Quietus