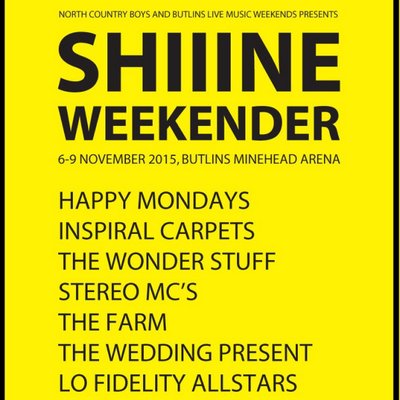 North Country boys are pleased to announce a brand new festival, which will be heading to the Butlins Minehead Arena in November 2015, aptly named THE SHIIINE ON WEEKENDER.

Minehead is set for an explosion of electrifying Indie and Dance over the November 6th 2015 weekend and leading the charge is the reunited and much loved icons HAPPY MONDAYS, a resurgent INSPIRAL CARPETS and Miles Hunts multi-legged Groove machine THE WONDER STUFF.

The Inspiral Carpets, who have just released their finest album to date, commented: “We’re really excited about playing live this summer. We spent a lot of last year writing and then promoting our new album. It will be great to bring the new songs as well as the classics to fit into what will be one of THE festivals of 2015! Bring on the Shiiine On Weekender!”

The carefully selected bill also features such greats as The Stereo Mc’s, The Farm, The Wedding Present, 808 State, The Orb, Space, Northside, Cud, Ultrasound, The Real People, Space, The Frank & Walters, Mark Morris, Asbo Kid and exclusive festival appearances by the reunited Lo-Fidelity Allstars, Milltown Brothers and Factory records last signing The Space Monkeys. There are many more acts to be announced as well over coming months once current tours end.

Peter Hooton, of iconic Liverpool act The Farm, adds: “We are really looking forward to the Shiiine Weekender and meeting up with some of our old friends. Suggs from Madness told me how good these weekends were when music and enjoyment combine to make a special atmosphere.”

There will be exclusive DJ sets, including the legendary Pat Nevin (Chelsea & Everton FC) , Terry Farley, Graeme Park and Dave Booth as well as exhibitions, Pool Parties, Cinema screenings and stages dedicated to promoting the best up and coming new bands hosted by Cooking Soup and other great promoters such as Cool Britannia and Keep it Social.

Not since the early 90’s has a festival pulled together a bill that will appeal to so many like- minded music fans. This truly is a celebration and reigniting of that glorious period in music when clubbers and gig-goers came together in what seemed a decade long party. The influence of this time is still prevalent in much of society today. The bands never faded, the music never faded it just seemed that the bands were cast aside. It was and still is MUSIC FOR MUSIC’S SAKE.

Nothing more, nothing less. The event is already on its way to a sell out just under a year in advance.

The festival takes place at Butlins Minehead Arena which has recently undergone a £16m redevelopment to provide the best possible facilities for this unique new festival.

Coaches will be running from across the country in association with Big Green Coaches.

3 day Tickets are available from

Exclusive: A limited number of 4 day tickets are available from Eventim.co.uk which give access to the site on Thursday and will feature DJ sets and bands playing live. These are for 4 people and include a Silver 4 Berth self- catering chalet.