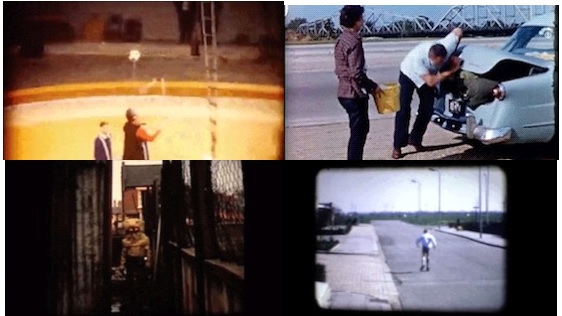 New Hands are excited to share their video for “Strange Attractor” today, the first GIF-based generative music video of its kind. Each time a viewer watches the video, a different randomized sequence is loaded from a database of over 900 GIFs, each of which was created by the band from archived home videos found on YouTube.

FLOOD Magazine premiered the video and write, “this regenerative art project means an endless possible combination of images blending together into one surreal mélange of lived experiences and snapshots into the lives of total strangers. With Spence Newell’s grave vocals and the synthetic beats, ‘Strange Attractor’ is a mix of industrial electro and ’80s new-wave cool.”

The video can be seen on the band’s site HERE.

Gord Bond, the drummer of New Hands and a visual artist, came up with the idea and explains,

“It was the GIF format that intrigued me. Technically it is a picture file, but it allows for animation. To me this was an interesting dualism. On the one hand it’s a video and on the other a still image. By using the GIF files we compiled as the frames for the video we are bringing attention to the structural element of video – the individual frame, which when stitched together create movement. This idea of stillness vs movement is also repeated in the thematic element of the video. The GIFs all contain some form of movement. Movement is critical to the song itself, it is constantly in motion.”

“GIFs hold an interesting space in current Internet culture: they are notoriously slow to load due to their relatively large file size, but despite this they have become one of the most popular types of media to share online. They are the perfect middle ground between sharing a still image, and a YouTube video. They are the perfect way to capture an exact moment.”

Being difficult to pigeonhole suits the Hamilton, Ontario and Leeds-based quintet just fine. Self-avowed fans of real instrumentation, they produce late-night dance songs laced with bass, synth and digital effects with a complex but utterly danceable sound. A hybrid of ‘80s new-wave and more modern dance/electronic with a pulsing beat and dark, seedy romance, “Strange Attractor” was mixed by Graham Walsh of Holy Fuck and is a perfect introduction to the new band, whose debut full-length album will be coming in 2015.