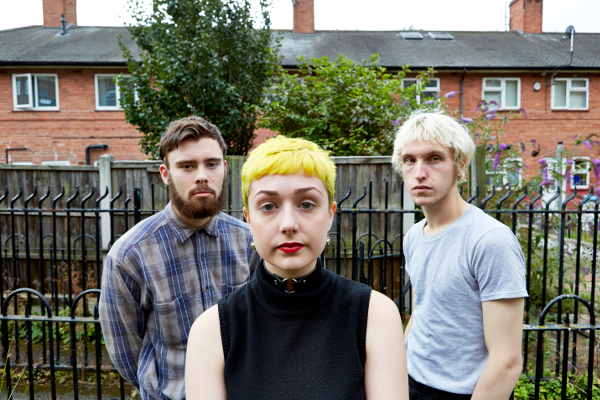 Currently on tour with The Xcerts – dates below

“Like a quieter, calmer Smashing Pumpkins and boasting the bass bounce of the Breeders, it’s a constantly transforming track that mixes clever time signatures with bold dynamics and a baffling burst into life in the major key.” NME

“… a cause for celebration, if you happen to enjoy being whomped about the head by more than mildly momentous guitar, bass and drums, delivered with some of the feral power of Pixies” Guardian

As a triumphant year begins to come to a close, Nottingham’s Kagoule have unveiled a new track entitled ‘Gush’. Listen now on Soundcloud. The track is available to download now for free as part of their Dolium BitTorrent package, which also includes recent single ‘It Knows It’ (watch the video via YouTube), another track ‘Adjust The Way’, as well as hand drawn artwork and lyrics.2014 has been a whirlwind year for the alt. rock trio, having played Glastonbury festival, played shows alongside the likes of METZ, Iceage, Sebadoh, Drenge and The Wytches, getting a track playlisted by BBC Radio 1, as well as starting work on their debut album for Earache Records with Arctic Monkeys’ producer Ross Orton. As the band put the finishing touches to their debut full-length, 2015 looks set to be an even bigger one for Kagoule.

The band are currently on tour with The Xcerts and have a handful of shows left before the end of the year.