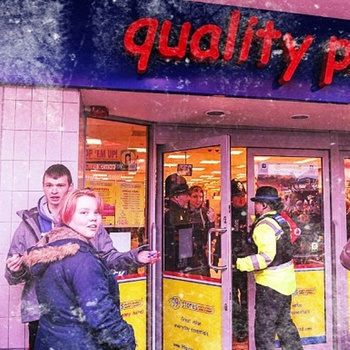 Introducing Poundstore Riot. Poundstore Riot is a collaboration between Welsh lo-fi maestro Ash Cooke (Pulco, Derrero) and Stu Kidd (BMX Bandits, The Wellgreen). The pair met in December of last year during  a riot  in Wrexham. What happened next is an honest well thought partnership.

Having been sentenced to a 4 month imprisonment for their crimes, pair were given the opportunity to write and record songs as part of > their rehabilitation. The resulting album, entitled ‘Writing The > Wrongs’ was released via Folkwit Records on November 10th and is streaming below. The story behind their collaboration is enough to captivate you to listen to their efforts.

In the days following their imprisonment last December for inciting a minor riot at a half price Poundland sale in Wrexham, musicians Ash Cooke and Stu Kidd felt the need to take stock of their situation and face up to the reality of their actions. It was suggested that their difficult DIY home studio musical backgrounds could explain their crimes and also be used as a focus for rehabilitation

‘The psychologists believe that a bad childhood experience of home recording could be the cause of my antisocial behaviour ‘ Kidd told reporters ‘but if those fascists think that having to sing through a homemade pop shield in me mams downstairs toilet made me deck that security guard then their heads need looking at just as much as mine!!’

‘They gave us guitars and told us to write about our childhood recording experiences ‘Cooke explained ‘after playing just a few chords the memories came flooding back and so did the tears!!!’
Following two months of daily music therapy sessions and various cold water treatments a decision was taken to allow Kidd & Cooke the opportunity to record their music

Kidd recounts the day that sessions began ‘we thought that we’d be off to somewhere cool to lay down the album. Somewhere like Rock field! Looking back now, when the head warden came in with a large cardboard box I should have known better!’ The equipment was shit and so was the studio’

Dr Hans Shivlemann from the prison music therapy unit was responsible for the design of the recording set up ‘There was certainly enough money in the budget to send those two boys somewhere nice’ he explained ‘but the whole purpose of our approach to rehabilitation was to allow the patients the chance to face up to the inadequacy of their childhood studios and learn to record responsibly with simple equipment!’ ‘The album they have made is a modern triumph and it is my hope that they will release it to the public and share their recording experiences with DIY musicians both young and old once they are back in the real world’

Kidd and Cooke were released from Thorn Cross at the end of April and have decided to name their band POUNDSTORE RIOT after the incident last year that may just be the making of the two!

Since their release Kidd & Cooke have been placed on a six months community payback scheme. This will involve them both working on public garden improvement projects, moving equipment for upcoming bands and teaching DIY recording techniques to disadvantaged children and senior citizens

The release is incredibly intricate, intelligent and all round entertaining.