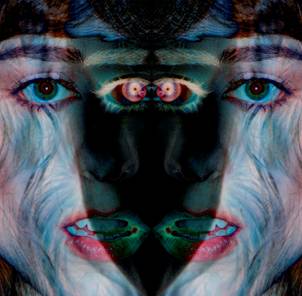 The track is one of two 7″ records released as part of the 2014 edition of Snowflakes Christmas Singles Club, a small Netherlands-based festive label set up for the love of making limited vinyl just for Christmas. Each single, restricted to 500 copies only and pressed on snow-white vinyl, features an original commissioned composition along with an interpretation of an existing festive track, and Hannah is currently offering 100 limited signed copies directly from her website.

On ‘Find Peace’, the fifth single in the Snowflakes series, Hannah is joined by renowned electronic musician and producer Benge. Embracing her influences of 60s electronic pioneers like Delia Derbyshire, 80s artists like John Foxx and OMD (both of whom Hannah has collaborated with in recent years), along with current acts like Vessel and Alt-J, the London-based artist harnesses a wide range of vintage analogue electronic synthesizers to deliver a haunting, contemporary Christmas song.

Longing for the cold but merry winters of yesteryear in these current times of global warming, conflict and political tensions, the song mirrors the universal message of the festive season: it’s a tasteful sentiment to the ever-pressing needs of humanity, to ‘Find Peace’ in troubled times.

Hannah first came to recognition with her mesmerizing, hand-punched music box covers in her 2010 ‘Rebox’ EP, and the B-side to ‘Find Peace’ sees her capitalize on her unique talent in a masterful, rebox interpretation of Greg Lake’s 1975 Christmas hit, ‘I Believe In Father Christmas’. Imploring a return to the traditional values of Christmas as a time of family warmth, love and a feeling of acceptance, it’s the perfect companion piece to the A-side, with Hannah’s beautiful vocals soaring above subtle electronics.

Having released her critically lauded solo debut album ‘The Broken Wave’ in 2011, Hannah then formed The Magnetic North, a collaborative project with Simon Tong (of The Verve and Gorillaz fame) and Erland Cooper (Erland & The Carnival) which received widespread critical acclaim. Continuing her solo work this year, her latest release, ‘Fabricstate’ EP, is another emotive and skillful demonstration of Hannah’s considerable talent and includes ‘Chloe’, a track which claimed a prestigious Royal Television Award for ‘Best Original Title Music’ on Channel 4’s ‘Dates’.

Consistently drawing upon her experience scoring brass and string arrangements for the ‘Orkney: Symphony of The Magnetic North’ album, coupled with her own orchestral work at Sadler’s Wells Theatre, it is also clear that Hannah’s technical background and passion for using analogue synthesizers combined with self-made organic instruments continues to influence her magical sound. It is a sound that is again evidenced here on a breathtaking, festive release that is brimming with emotion.

The Keep Shares New Video “Up Into The Gold”